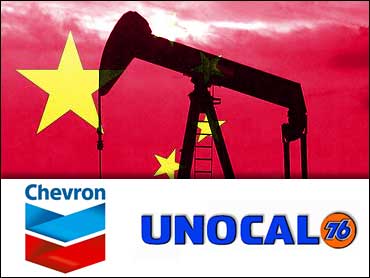 China's CNOOC Ltd. said Tuesday it has withdrawn its $18.5 billion cash offer for Unocal Corp., stating it considered raising its bid, and "would have done so but for the political environment in the U.S."

Late last week, reports said Hong Kong-based CNOOC was trying to decide between raising its bid for Unocal to as much as $20 billion or to drop it entirely due to objections by critics who contend the acquisition might imperil U.S. energy security.

Unocal's board has endorsed Chevron's offer and its shareholders are set to vote on the deal Aug. 10.

CNOOC's bid sparked concerns in Congress that the proposed deal presented risks to America's economic and national security. A flurry of legislation intended to derail CNOOC's offer has been introduced in both houses of Congress.

Influential investment advisory group Institutional Shareholder Services on Monday endorsed Chevron's bid, ISS estimated it would take six to nine months for CNOOC's bid to navigate through all the political and regulatory hurdles in the United States and China, with no guarantee that the deal would ever be completed.

In a statement Tuesday, the Chinese oil company said "the unprecedented political opposition that followed the announcement of our proposed transaction was regrettable and unjustified. This is especially the case in light of CNOOC's purely commercial objectives and the extensive commitments that CNOOC was prepared to make to address any legitimate concerns U.S. officials may have had regarding our acquisition."

The company said that the political environment created "a level of uncertainty that presents an unacceptable risk to our ability to secure this transaction."