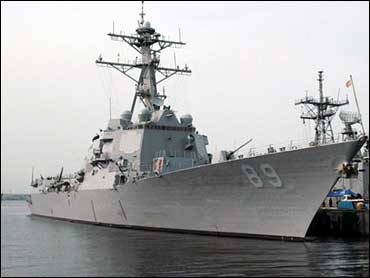 WASHINGTON -- China has returned to the U.S. an unmanned underwater drone the Chinese Navy seized unlawfully last week in international waters, the Pentagon said. China’s defense ministry said it handed the drone back after “friendly consultations.”

The Chinese Navy vessel that had seized the drone returned it near the location where it had been taken, Pentagon press secretary Peter Cook said in a statement issued late Monday. The incident occurred last Thursday near the Philippines.

The USS Mustin received the vehicle for the U.S. in international waters about 50 miles northwest of Subic Bay, according to Cook.

The U.S. said the drone was being operated by civilian contractors collecting unclassified scientific data in international waters. Officials say a noncombat ship was recovering two drones when a Chinese ship approached, launched a small boat and picked up one of them.

Cook said the U.S. will continue to investigate the incident.

State Department spokesman for East Asia and the Pacific, Justin Higgins, said Monday the seizure of the underwater drone was “unacceptable” and without basis in international law.

“China’s seizure of a U.S. unmanned underwater vehicle (UUV) operating lawfully and in plain sight of a U.S. Navy vessel was unacceptable. China’s action had no basis under international law,” Higgins said.

Coming after the U.S. and China had already agreed the drone would be returned, Mr. Trump’s comment breathed new life into an incident that both militaries seemed eager to put behind them, CBS News correspondent Adriana Diaz reported.

Chinese state media delivered a statement from its military this weekend that was laced with annoyance. It said China would return the drone because it posed no safety threat, but added that the U.S. had unilaterally and inappropriately hyped the issue.

Hours later, Mr. Trump, while in Alabama for his victory tour on Saturday, launched two tweets at China. The most recent suggesting: “We should tell China that we don’t want the drone they stole back.- let them keep it!”

“We don’t like the word steal. That’s totally inaccurate,” Chinese Foreign Ministry spokeswoman Hua Chunying said. “The Chinese navy found the device and examined it in a professional manner… It’s as if you saw something on the street and someone asked you for it, you’d have to examine if it really belongs to them.”

An editorial in the state-run tabloid, The Global Times, went further, issuing a threat. It said if Mr. Trump “treats China after assuming office in the same way as in his tweets, China will not exercise restraint.”

The incident played out at the center of one of the most sensitive issues between the U.S. and China; the South China Sea. Six countries claim parts of the sea, but China declares nearly all of it is theirs. Recent satellite images also show China installing weapons on artificial islands it built there to defend its claim.

Further complicating the matter is that the drone appeared to be seized outside of China’s self-proclaimed jurisdiction.

One global political risk expert has suggested to CBS News that the timing of the incident could have been meant to send a direct message to Mr. Trump.

“The fact is that the Chinese could have been doing this six months ago, 12 months ago – they’re not. The fact that they are doing it now shows that they clearly don’t like the statements that have been made by President-elect Trump on a host of issues with China,” Eurasia Group founder Ian Bremmer said Monday on “CBS This Morning.”

Earlier this month, Mr. Trump irked China when he spoke on the phone with Taiwanese President Tsai Ying-wen, breaking precedent and becoming the first American president-elect to speak with a Taiwanese president since the U.S. cut formal diplomatic ties with the island in 1979.

“Unlike a lot of other countries, if the Americans really decide they are going to escalate versus China, the Chinese have the capability to give it right back,” Bremmer said. “Trump really believes that America has a much stronger negotiating position internationally, and the Chinese are going to show him that the reality is very unlike that.”

Bremmer said there is no question that the Chinese have been conducting more “military exercises and live fire” in the South China Sea, where the contested waters and islands have become a sensitive issue between the U.S., China and other countries in the region.

“They overflew with a nuclear capable bomber and now they’ve allowed their sailors in the region to be more aggressive in responding to a drone being available,” Bremmer said.