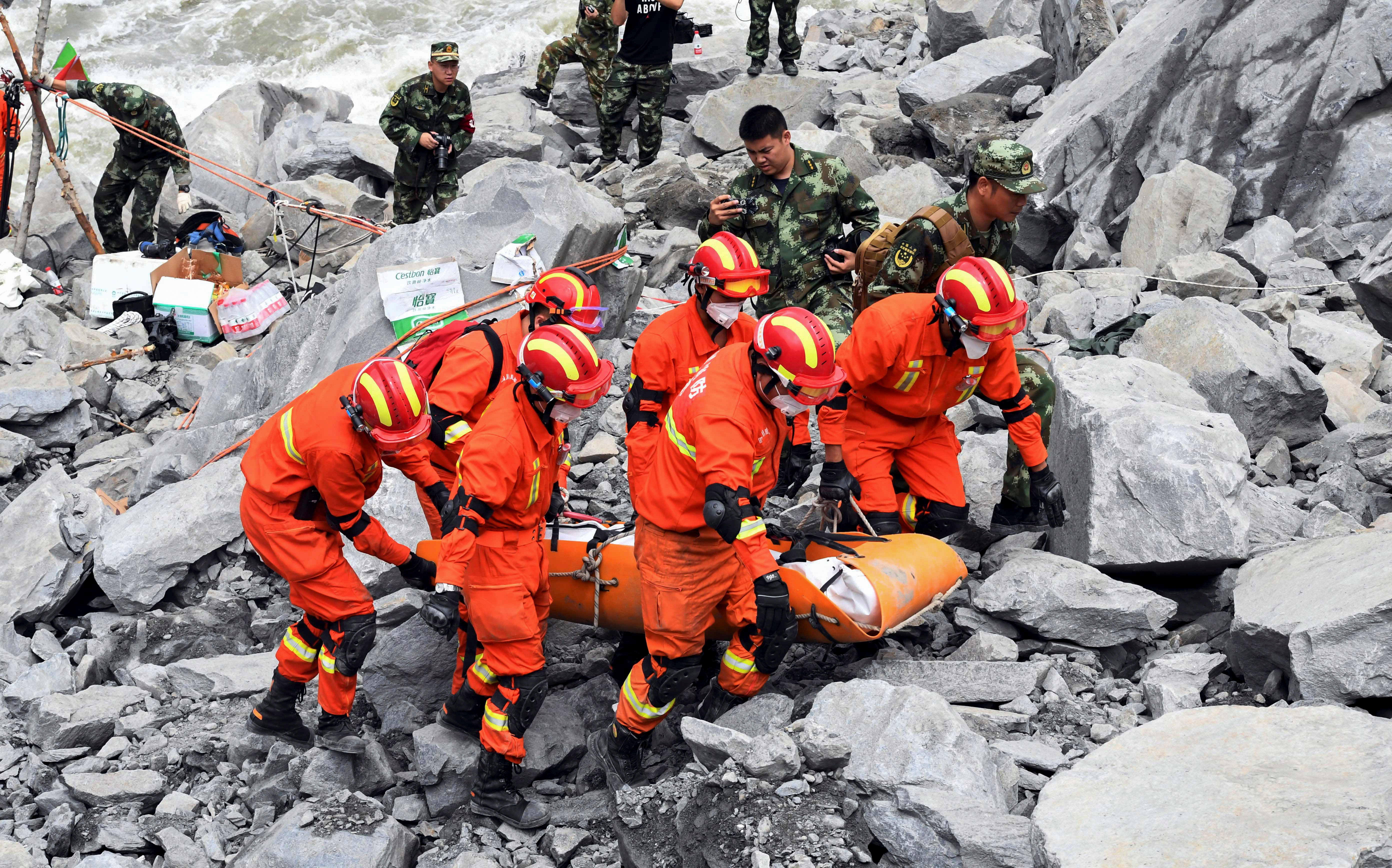 MAO COUNTY, China -- Rescuers recovered 10 bodies and were still searching for 93 missing people on Sunday, a day after a massive landslide buried a picturesque mountain village in southwestern China.

More than 2,500 rescuers with detection devices and dogs were looking for signs of life amid the rubble of huge boulders that rained down on Xinmo village in Sichuan province early Saturday.

As of Sunday night, only three people -- a couple and their month-old baby - had been rescued from the disaster site.

Sitting on the eastern margin of the Tibetan Plateau in Aba prefecture's Mao County, Xinmo has in recent years become a tourism destination for its picturesque scenery of homes in lush meadows tucked between steep and rugged mountains. But after the landslide, the village was reduced to a vast area of rubble.

As heavy machines removed debris and men scoured the rubble for survivors on Sunday, relatives from nearby villages sobbed as they awaited news of their loved ones.

"It was as if strong winds were blowing by, or a big truck rumbled by," Tang Hua, a 38-year-old woman from a nearby village, told The Associated Press. "The houses were shaking, as if there were an earthquake. We rushed out and saw massive smoke. With a thundering sound, the smoke suddenly lifted. We realized it was a landslide."

"As we ran for safety, we looked this way and saw the village flattened," she said.

Tang has relatives in Xinmo, but she said little could be done at this point. "The whole village is done for," she said.

The landslide carried an estimated 18 million cubic meters, about 636 million cubic feet, of earth and rock -- equivalent to more than 7,200 Olympic-sized swimming pools -- when it slid down from steep mountains. Some of it fell from as high as 1.6 kilometers, about 1 mile.

It buried 1.6 kilometers, nearly 1 mile, of road and blocked a 2-kilometer, about 1.2-mile, section of a river as it completely wiped away the village, which was once home to 46 families comprising more than 100 people.

The Sichuan provincial government said Sunday that 10 bodies had been found, lowering an earlier figure of 15 that had been reported by state media. It also lowered the number of missing to 93, saying 15 people on an initial list of the missing were accounted for.

There were 142 tourists in the village around the time the landslide hit, and all were alive, said Xu Zhiwen, executive deputy governor of Aba prefecture.

Three members of a family from the village were rescued five hours after the landslide struck on Saturday. Qiao Dashuai, 26, told state broadcaster China Central Television that he and his wife awoke to cries from their 1-month-old son at around 5:30 a.m.

"Just after we changed the baby's diaper, we heard a big bang outside and the light went out," Qiao said. "We felt that something bad was happening and immediately rushed to the door, but the door was blocked by mud and rocks."

Qiao said his family was swept away by water as part of a mountain collapsed. He said they struggled against the water until they met medical workers who took them to a hospital. His parents and other relatives were among the missing.

A government-run news outlet said that Qiao and his wife were in stable condition on Sunday and that their infant was sent to an intensive care unit with pneumonia induced by mud inhalation.

Experts on state media said the landslide was likely triggered by rain. The mountainous region has been prone to geological disasters. In May 2008, a magnitude 7.9 earthquake killed nearly 90,000 people in Wenchuan County, 40 kilometers, about 25 miles, from Mao County.

Scientist He Siming told the state-run Beijing News that the 2008 quake could have done structural damage to the mountains flanking Xinmo. He said the rain could have been the external cause of the landslide.

In 2014, a landslide in the same county killed 11 people when it struck a section of a highway.