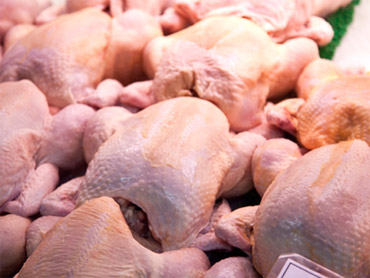 Shares of the nation's chicken producers could tumble on Monday after China said it will slap a hefty tariff on U.S. chicken imports to combat what it says are unfairly low prices.

The Chinese government said Sunday that its investigation found that U.S. chicken products are being sold at low prices which undermine the local market. New import duties ranging from 50.3 percent to as much as 105.4 percent will take effect Monday and last for five years.

China was the largest importer of U.S. chicken in 2009 at $752.5 million but has been embroiled for months over duties imposed on U.S. chicken producers. The Chinese government said the new duties will replace ones imposed in February after preliminary results of the probe showed U.S. chicken was being sold at low prices a process called "dumping."

The news could hurt U.S. chicken makers, whose exports have buffered weak demand at home. The industry has been recovering from a downturn brought on by weak demand and high ingredient prices. Trade with Russia the second largest chicken importer in 2009 just reopened after being closed off since the winter over concerns about product safety.

The tariffs apply to chicken parts and whole birds, but not to live chickens or cooked products such as chicken sausage. Included are chicken feet, which most Americans throw away but are a delicacy in southern China.

Beijing and Washington also are embroiled in disputes over access to each other's markets for steel pipes, movies and books and other goods. The trade disputes have proliferated as the two governments try to boost exports amid weak demand. They have accused each other of protectionism that they say could slow a global recovery.