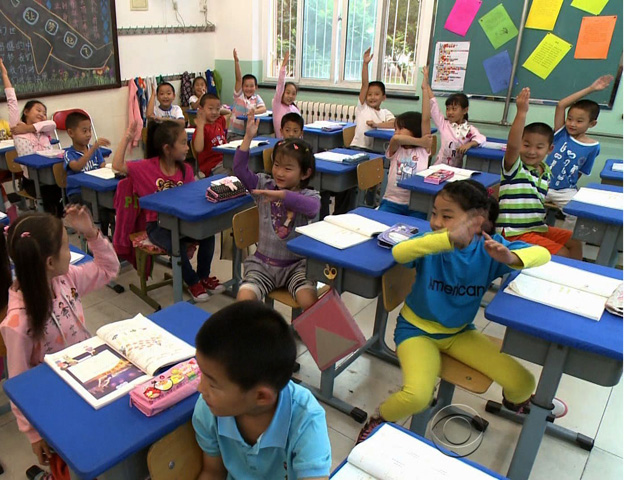 BEIJING -- We got the results on Tuesday from a test given to 15-year-olds all over the world.

Students in Shanghai, China, scored the highest in math, reading and science. American teens did not make the top 20.

So we were surprised to learn that the Chinese are trying something revolutionary. They're cutting back on homework.

Ask a group of second-graders whether they're happy about not having homework and the reaction is not surprising.

All raise their hands – a resounding show of support.

The proposed changes mean students in grades one through three would not be assigned homework. Those in grades four through six would have less than an hour of homework a day.

Liu Xiaojing teaches math and Chinese at Beijing's Haite Garden Elementary School which is testing out the new rules.

"Not giving homework leaves more space for kids to grow," she told us. "(Students can) develop freely and do what they enjoy doing."

Ten-year-old Daisey might read books, dance or draw. Twelve-year-old Charlie had something else in mind.

"I play football and play basketball with my classmates," he said.

China puts heavy emphasis on standardized tests - which prize memorization over creativity. Under the new proposals, those would be eliminated in lower grades.

High school seniors Emma Jiang and Jessie Li, both 17, told us the academic pressure is intense.

"When I was in junior high school, sometimes I cried in the middle of the night because I dropped some grades in my test," Emma said. "I cried."

From an American perspective, it seems that Chinese students are doing very well. Test scores are high. Why would China make this change?

"I feel like, you know, we miss out on the more important things," Jessie said. "When you tell people that 'I got a 2400 on my SAT,' that's not really convincing that you're a well-rounded person."

And with China's pride so intertwined with its students' top rankings, the education ministry has so far been silent on when its "no homework" rule may be applied across the country.