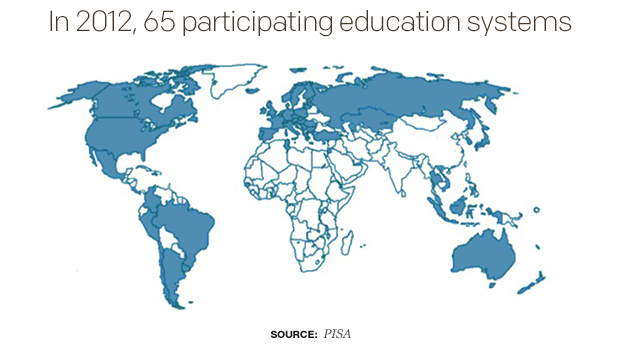 The academic performance of 15-year-olds in the United States has stayed relatively the same in recent years, but with other nations improving, American students are slipping behind their international counterparts, according to a study released Tuesday.

The National Center for Education Statistics (NCES) released data on the 2012 academic performance of 15-year-olds around the world in three subjects: reading, mathematics, and science.

"We are not seeing any improvement in the U.S. … our ranking is slipping because other countries are improving," said Jack Buckley, NCES commissioner.

Shanghai, one of three educational systems in China that participated in the assessment -- known as the Program for International Student Assessment (PISA) -- has remained the top performer in all three subjects. Sixty-five countries took part in all.

Singapore, the Republic of Korea, and Japan also had high averages.

The assessment was developed and organized by the Organization for Economic Cooperation and Development (OECD) and is implemented in the U.S. by NCES.

PISA is designed to evaluate what students have learned inside and outside of school and how well they apply that knowledge in real-world contexts.

The assessment is administered every three years and was first implemented in 2000.

For the first time three U.S. states -- Connecticut, Florida, and Massachusetts -- participated in the benchmarking system and received separate scores.

The three U.S. states volunteered to participate in this assessment and provided the funding, which according to Buckley is around $600,000.

On average, U.S. students' strongest subject is reading, with a score of 498.

Buckley tells CBSNews.com there is no specific ranking of how the 65 countries compare overall, because the scales for each subject are different.

In math the levels range from one through six: level one being the ability to identify information and carry out routine procedures; level six students are able to apply insight along with a mastery of symbolic and formal mathematical operations.

Nine percent of U.S. 15-year-olds scored a proficiency level of five or above; the average score for OECD nations is 13 percent. In top-ranked Shanghai, 55 percent meet that benchmark.

The average U.S. score in science literacy was 497, slightly behind the OECD average of 501.

Buckley points to Ireland and Poland as examples of countries whose average scores were not drastically different than the U.S.'s in 2009, but both have passed the U.S. in all three subjects in the latest report.

Buckley reiterated that the assessment conveys trends and doesn’t draw conclusions about why students in particular countries outperform others.

"This study doesn’t tell us what works in education," Buckley explains, adding that more detailed research is needed in order to generate a hypothesis.