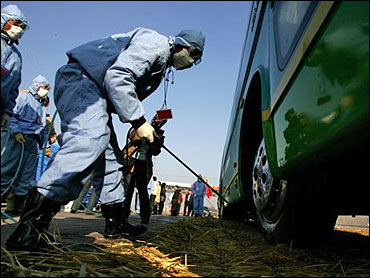 China reported its first three confirmed human cases of bird flu Wednesday as the government raced to vaccinate billions of chickens, ducks and other poultry in a massive effort to stop the spread of the virus.

The World Health Organization said the victims contracted the virulent H5N1 strain of bird flu, and two of them died.

The Health Ministry confirmed two human cases in the central province of Hunan and one in the eastern province of Anhui, the official Xinhua News Agency reported. Both areas reported outbreaks in poultry in the past month.

Experts are especially worried about the potential for bird flu to spread and mutate in China because of its vast poultry flocks and their close contact with people. It also is a major migration route for wild fowl, which experts say might be spreading the virus.

The Chinese government has responded quickly to public health threats after being criticized in 2003 for failing to respond to foreign pleas for information and cooperation at the start of its outbreak of severe acute respiratory syndrome. Since the SARS outbreak, Beijing has created disease testing laboratories and a national health warning network.

"They have reported these outbreaks rapidly, they've been investigated promptly, the laboratory analysis was done under the supervision of WHO," Thompson said from Geneva. "I think they're doing the right things. It's just disappointing that there's so many human and animal outbreaks."

The Chinese bird flu fatalities were a 12-year-old girl in Hunan and a 24-year-old female poultry worker in Anhui, said Roy Wadia, a WHO spokesman in Beijing. The third case was the girl's 9-year-old brother, who fell ill but recovered.

China initially said the girl, her brother and a schoolteacher who fell ill at the same time were negative for the virulent H5N1 strain of bird flu. But the government later reopened the investigation and asked WHO for help.

Wadia said China recorded the girl as a bird flu death, but WHO could not reach a conclusion because her body was cremated. He said Chinese investigators based their decision on the girl's shared background with her brother and the circumstances of her illness. There was no official word on the teacher's status.

The government had not previously disclosed there were any suspected human cases in Anhui, where an Oct. 20 outbreak in the city of Tiancheng killed about 550 birds.

Wadia said the poultry worker did not live near the site of that outbreak.

"She apparently had close contact with sick birds," he said. "She died in a hospital. She was therefore tested adequately."

China has reported outbreaks in chickens and ducks in the past month nationwide, prompting authorities to destroy millions of birds in an effort to contain the virus. The government also announced an ambitious effort Tuesday to vaccinate all the country's more than 14 billion farm birds.

Experts also are testing a poultry worker who fell ill in the northeastern province of Liaoning, which has suffered four outbreaks. All farm birds in the province were ordered vaccinated early this month, said Fu Jingwu, deputy director of the provincial Animal Health Supervision and Management Bureau.

He said the effort covered 320 million birds. The province also has destroyed more than 15 million chickens, ducks and other birds.

The council also said it would offer tax breaks and subsidies to help counter the effects of bird flu outbreaks.

Secretary of State Condoleezza Rice urged governments to improve communications and to encourage the private sector to help prepare for outbreaks before they happen.