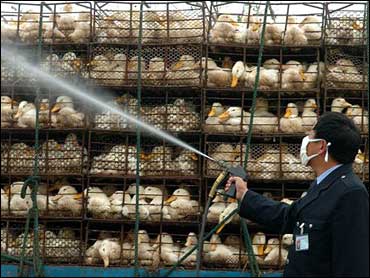 The Chinese government Monday reported a new case of bird flu in poultry in the country's east, while experts from the World Health Organization traveled to central China to investigate whether the virus killed a 12-year-old girl there.

The latest poultry outbreak was first reported Nov. 6 when 800 birds died in Huainan, a city in Anhui province, China Central Television said. It was confirmed on Monday to be the virulent H5N1 strain that has killed at least 64 people in Asia since 2003, mostly through contact with infected birds.

Some 126,000 poultry within two miles of the affected area were slaughtered as a precaution, the news report said.

It was the second time in the last month that Anhui has reported an epidemic in its poultry. The last one was confirmed Oct. 24 in the city of Tianchang, where 2,100 geese and chickens were found dead of the virus.

China has not confirmed any new human cases of bird flu, but authorities have warned that infections among people are inevitable if outbreaks among the country's vast poultry flocks cannot be controlled. Experts also fear H5N1 could mutate into a form that is easily passed from human to human and spark a pandemic.

A six-member WHO team headed to the central province of Hunan on Monday to help determine if bird flu killed a girl and sickened two others in a village that suffered an outbreak in poultry last month, said Roy Wadia, a WHO spokesman in Beijing.

The team will meet provincial officials and possibly visit the two patients, or their families, who became ill in Wantang village, where the government says 545 chickens and ducks died of bird flu.

The girl died Oct. 17 after developing a high fever. Her 9-year-old brother, who showed the same symptoms, was discharged from a hospital over the weekend although doctors were still doing blood tests. A 36-year-old schoolteacher was said to be recovering.

Also Monday, China said it would soon begin testing its own human vaccines for bird flu. Lab tests have already found the vaccines to be safe and effective on mice, the government's Xinhua News Agency said.

Zhong Nanshan, director of the Guangzhou Institute of Respiratory Diseases, said China had developed a drug equivalent to Tamiflu, an antiviral believed to be the best available treatment for bird flu in humans.

"It has some effect in treatment against the virus," Zhong, who was at the forefront of SARS research, said in an interview published Sunday in the Information Times newspaper. "There will be a new development in the near future."

The report did not give any details on the Chinese drug or when it will be available.

The city has killed the remaining 4,000 chickens and ducks in the affected flocks. Officials also announced plans to close two wild bird sanctuaries to the public.

"The bird flu is spreading faster and faster. We are mobilizing all forces, trying our utmost to prevent as much as we can and prepare for a possible pandemic on poultry as well as in humans," Nam said.

Elsewhere, four hens discovered dead in the remote Romanian village of Caraorman in the Danube Delta have tested positive for the H5 subtype of bird flu, officials said.

Authorities began culling about 2,000 domestic birds in the village on Monday, Agriculture Minister Gheorghe Flutur told Realitatea TV. Further tests will be conducted on the dead birds to see if they were infected with the deadly H5N1 strain that has been detected in two other Romanian villages in the same region.

Quarantines were imposed in the delta region after the earlier outbreak, with villagers ordered to keep domestic fowl confined in their yards.

In South Korea, senior officials from the 21 countries taking part in the Asia Pacific Economic Cooperative summit this week finished work on a statement leaders were expected to sign calling for increased cooperation on fighting bird flu. Officials said the members would agree to help each other develop a vaccine and enhance information-sharing between them.