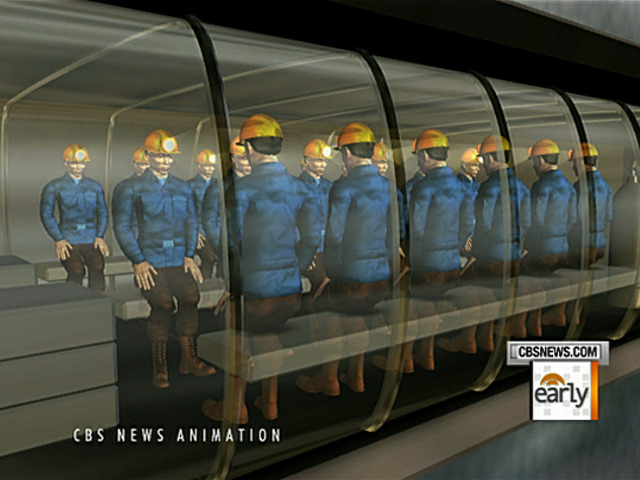 By now, it seems almost everyone has heard - and gasped - about the 120-day (shorthand: Christmas) timeline which Chilean officials have set for the rescue of the trapped miners. The only group of people who may not know about this four-month estimate is the trapped miners themselves. Chilean officials say they haven't told the miners because don't want to dampen their spirits, especially after the euphoria of finally establishing contact with the world above. But the euphoria is likely short-lived. "We are waiting for all of Chile to do everything to get us out of this hell," said Luis Urzua, shift foreman of the trapped miners, late Tuesday.

As the equipment to drill the larger "rescue" hole is assembled and staged (a process which we're told will take days) some are starting do to the math, and scratching their heads.

My sister is a geologist who drills for a living, so I've heard at the dinner table just how difficult, methodical, and slow it can be to bore through the earth. There may be some days when the drill gets stuck and doesn't bore down at all. But, a Chilean mining company which will assist with the drilling says the equipment they plan to use has the capacity to dig as much as 20 to 30 meters (roughly 65-98 feet) per day as they carve out the biggest "rescue" tunnel.  The miners are roughly half a mile (around 2,300 feet) below the surface.

Now, I'm no math whiz, but if they drill as quickly as the equipment would allow -  the numbers don't quite add up. By the more conservative estimate it seems they could reach them as soon as a month or so (roughly 35 days). So, why the estimate that it'll be Christmas?

I asked several experts to try to explain the math to me. Former assistant secretary of the U.S. Mine Safety and Health Administration, Davitt McAteer, told me over the phone that the Christmas-time estimate seemed conservative to him.

I received a similar answer from Dennis O'Dell who works for the United Mine Workers of America. He was also curious about the official estimate. I asked him to explain to folks (like me) who don't know much about drilling why it would take so long. He said that he simply couldn't really shed light on that issue. The timeline seemed stretched to him, too.

Both experts point out that there are complicating factors to drilling so deep in this gold and copper mine in the Chilean desert. The fact that the mine has already collapsed and may be unstable is just one issue.

But could a rescue take place much sooner than Christmas?

Of course, there is a lot of attention to "when" the miners will be rescued. Lest we forget that in these difficult conditions we might be wise to add another qualifier to the conversation: "if." But experts say that the geological conditions favor the miners survival as the 26-inch rescue hole is drilled in the coming weeks.