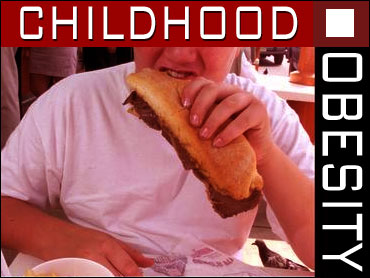 A dramatic increase in diabetes and other diseases related to childhood obesity in the United States has added millions of dollars to health care costs, a study said Wednesday.

"As overweight children become overweight adults, the diseases associated with obesity and health care costs are likely to increase even more," said the report from the Centers for Disease Control and Prevention.

The study, published in the May issue of Pediatrics, the journal of the American Academy of Pediatrics, said a review of hospital records found that "the proportion of discharges with obesity-associated diseases has increased dramatically in the past 20 years."

Researchers culled hospital discharge records, comparing obesity-related hospitalizations of 6- to 17-year-olds between 1979 and 1981 with those from 1997 through 1999.

Hospital costs for diseases related to childhood obesity increased from $35 million in 1979 to $127 million in 1999, according to the study.

About 13 percent of children and adolescents are overweight or obese, more than double the number two decades ago. Experts blame TV, computer games, lack of safe playgrounds and other factors that encourage kids to be sedentary — plus more access to super-sized portions of high-calorie foods.

At the same time, more children are suffering Type 2 diabetes, a dangerous disease that once struck mostly in middle age. Obesity also can worsen asthma and spark gallbladder disease. People even can die from obesity-caused sleep apnea, Dietz notes, when fat in the back of the throat combines with large tonsils to block the airway.

CDC researchers culled hospital discharge records, comparing obesity-related hospitalizations of 6- to 17-year-olds between 1979 and 1981 with those from 1997 through 1999.

Diabetes diagnoses nearly doubled, accounting for 2.36 percent of child hospitalizations in the late '90s vs. 1.43 percent in the late '70s, they reported Wednesday in Pediatrics.

Diagnoses of obesity alone tripled to reach 1 percent of hospitalizations.

The study may surprise parents, but not obesity specialists who called it high time someone pointed out the growing danger to youngsters.

"The kids who are fat are getting really fatter," said Dr. Nazrat Mirza of Children's National Medical Center, who has patients as young as 5 with obesity-caused sleep apnea.

The study "represents just the tip of the iceberg," she said — because doctors often don't record obesity on hospital discharge records. That's because insurance companies don't pay to treat it until the child comes down with a formal illness, she complained.

The government brought together star athletes Dominique Dawes, Herschel Walker and Martina Navratilova Wednesday to publicize the study and urge kids to stay slim by simply getting active.

"Get up and go outdoors," urged Education Secretary Rod Paige. "Swim, hike, ... dribble, slam-dunk. Do whatever, just move your body."