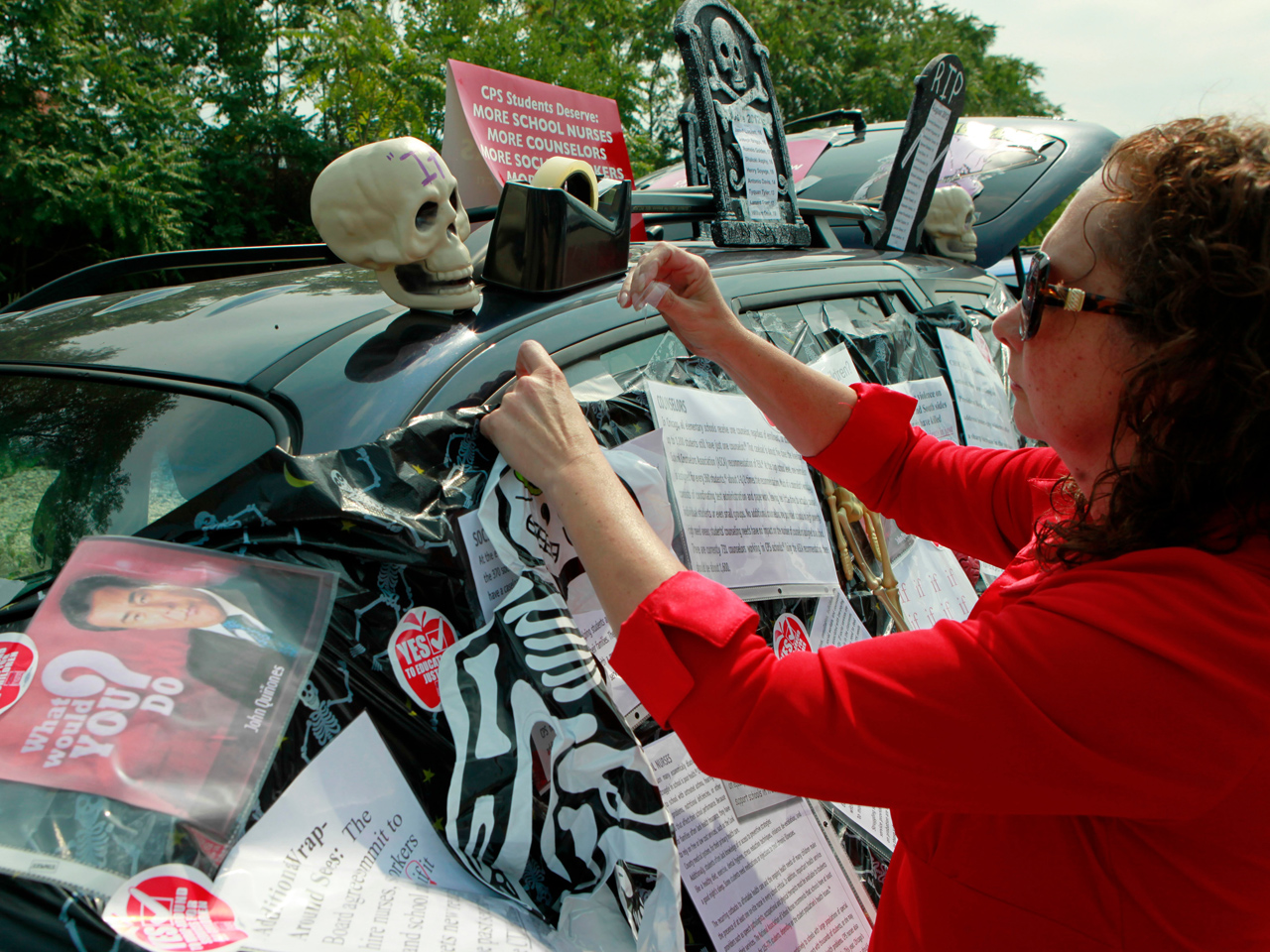 (CBS/AP) CHICAGO - Chicago teachers uncomfortable with a tentative contract offer decided Sunday to remain on strike, insisting they need more time before deciding whether to end an acrimonious standoff with Mayor Rahm Emanuel that will keep 350,000 students out of class for at least two more days.

Emanuel fired back Sunday night by instructing city attorneys to seek a court order forcing Chicago Teachers Union members back into the classroom. "This was a strike of choice and is now a delay of choice that is wrong for our children," he said in a statement.

Presented with a choice on whether to ask members to vote on a contract that union president Karen Lewis had at one point called "a fight for the very soul of public education," the union's 800-member House of Delegates told their leaders they needed more time to talk to the rank and file before ending the city's first teachers strike in 25 years. Lewis also said after announcing the continuation of the strike that delegates "do not trust" the Chicago School Board, reports CBS News' Ryan Corsaro.

Teachers had only a few hours to review a summary of a proposed settlement worked out over the weekend with officials from the nation's third largest school district. That wasn't enough time, they said, to digest a complicated contract that addresses two issues central to the debate over the future of public education across the United States: teacher evaluations and job security.

The union will meet again Tuesday, after the end of the Rosh Hashana, the Jewish new year.

"We felt more comfortable being able to take back what's on the table and let our constituents look at it and digest it," said Dean Refakes, a physical education teacher at Gompers Elementary School. "We can have a much better decision come Tuesday."

That timeline, however, means the soonest classes could resume would be Wednesday. That frustrated both Emanuel and some parents, who learned late at night a week ago Sunday that a flurry of last-minute negotiations had failed to produce a contract agreement and that the strike was on.

"I think a week is a long time to be wasting time. Another week would be murder. I don't think it's right," said Beatriz Fierro, the mother of a fifth grader. "They should be back in school. I don't think teachers should be on strike that long."

Other parents continued to stand with the union. As teachers walked picket lines in the past week and rallied Saturday in a park near downtown, they were joined by parents who have had to scramble to find baby-sitters or a supervised place for children to pass the time.

"As much as we want our kids back in school, teachers need to make sure they have dotted all their I's and crossed their T's," said Becky Malone, mother of a second grader and fourth grader. "What's the point of going on strike if you don't get everything you need out of it? For parents, it'll be no more of a challenge than it's been in the past week."

Emanuel didn't appear at a brief news conference Sunday night with city school board president David Vitale, who said 147 schools staffed with non-union workers and central office employees would be open Monday for students who are dependent on school-provided meals.

But in a statement, Emanuel was typically blunt. He accused the union of using the city's students as "pawns in an internal dispute." He said the strike was illegal because it endangers the health and safety of students and concerned issues — evaluations, layoffs and recall rights — that state law says cannot be grounds for a work stoppage.

"While the union works through its remaining issues, there is no reason why the children of Chicago should not be back in the classroom as they had been for weeks while negotiators worked through these same issues," he said.

The walkout, the first for a major American city in at least six years, canceled classes for students who just returned from summer vacation and forced tens of thousands of parents to find alternatives for idle children, including many whose neighborhoods have been wracked by gang violence in recent months.

With an average salary of $76,000, Chicago teachers are among the highest-paid in the nation. The contract outline calls for annual raises, but it doesn't restore a 4 percent raise that was rescinded by the mayor last year.

That upset many teachers, said union delegate Susan Hickey, a school social worker. But she said the proposal was ultimately one teachers — who are worried that staying out beyond mid-week will further upset parents — could support.

"Personally I think there's a lot of us who don't want to lose the parental support," she said.

Lewis said delegates weren't yet willing to go back to work while contract language was amended because of the level of distrust between the union and the city, and the fact the settlement on the table remains tentative.

"The trust level is just not there," Lewis said. "You have a population of people who are frightened of never being able to work for no fault of their own. They just don't have the trust."

Emanuel, who did not personally negotiate the deal but monitored the talks through aides, has pushed hard for a contract that includes ratcheting up the percentage of evaluations based on student performance, to 35 percent within four years. The union contends that is unfair because it does not take into account outside factors that affect student performance such as poverty, violence and homelessness.

The union also pushed for a policy to give laid-off teachers first dibs on open jobs anywhere in the district, which the city said that would keep principals from hiring the teachers they thought best qualified for the position.

The teachers walked out Sept. 10 after months of tense contract talks that for a time appeared to be headed toward a peaceful resolution.

Emanuel and the union agreed in July on a deal to implement a longer school day with a plan to hire back 477 teachers who had been laid off rather than pay regular teachers more to work longer hours. That raised hopes the contract would be settled before the start of fall classes, but bargaining stalled on other issues.

To win friends, the union representing 25,500 teachers, engaged in something of a publicity campaign, telling parents repeatedly about problems with schools and the barriers that have made it more difficult to serve their kids. They described classrooms that are stifling hot without air conditioning, important books that are unavailable and supplies as basic as toilet paper that are sometimes in short supply.

The strike upended a district in which the vast majority of students are poor and minority. It also raised the concerns of parents who worried not just about their kids' education but their safety. Chicago's gang violence has spiked this year, with scores of shootings reported throughout the summer and bystanders sometimes caught in the crossfire.

"I don't like being on strike. Nobody in my school likes being on strike, but we understand the reason. It's not an easy process," said Michael Bochner, a teacher at Cesar Chavez Elementary.

"My membership," he said, "really wants to go back to work."