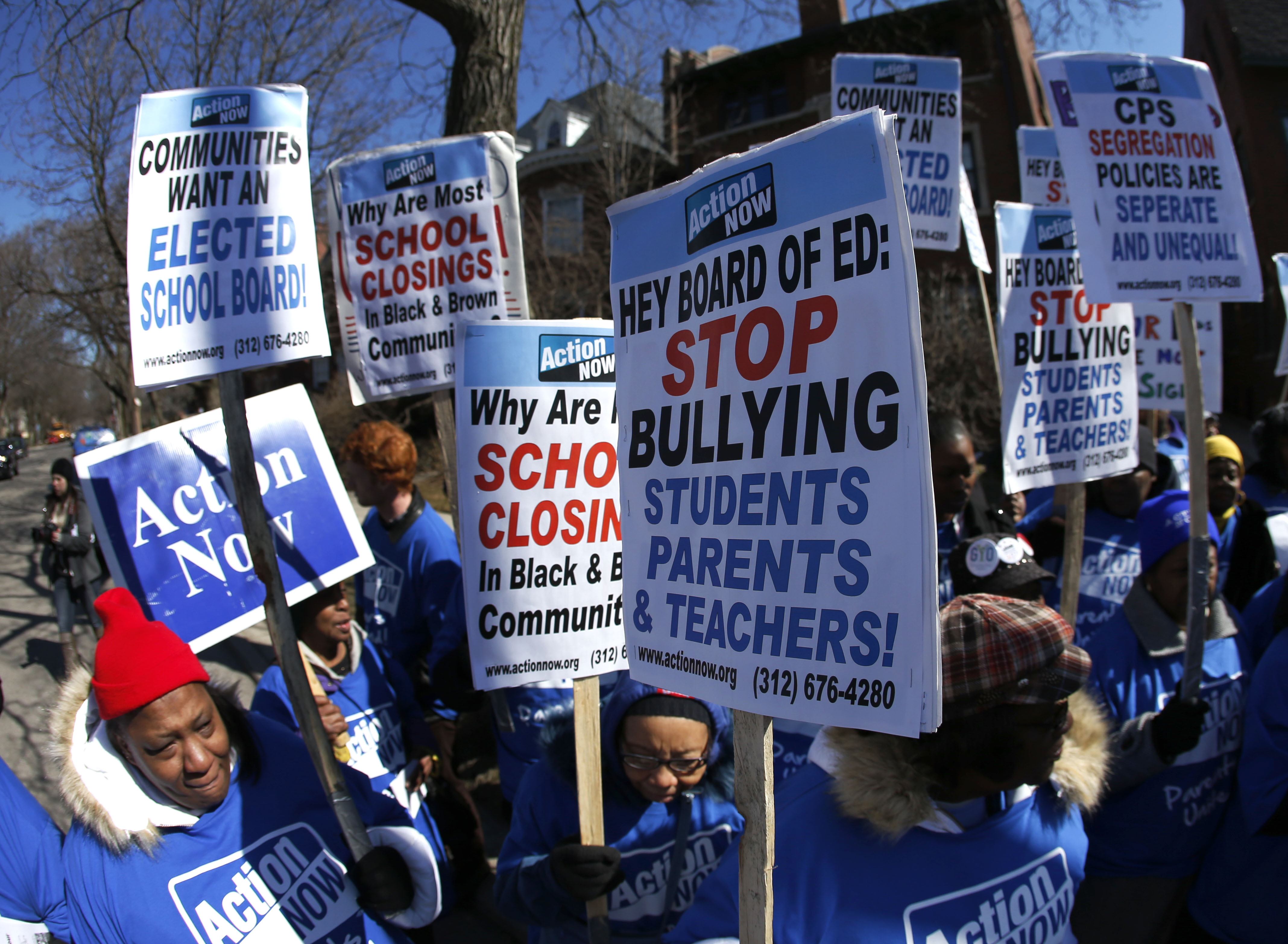 CHICAGO Chicago Public Schools officials said Thursday they plan to close 54 schools in an effort to address a $1 billion budget shortfall and improve a struggling educational system — a plan that drew the ire of parents and teachers.

District CEO Barbara Byrd-Bennett and Chicago Mayor Rahm Emanuel say the closures are necessary because too many CPS buildings are half-empty. The nation's third-largest district, CPS has about 403,000 students but has seats for more than 500,000, officials say. But opponents say the closures will disproportionately affect minority children and endanger students who may have to cross gang boundaries to attend school.

The plan will affect about 30,000 students, CPS officials said. They say money being spent to keep underutilized schools open could be better used to educate students elsewhere.

"Every child in every neighborhood in Chicago deserves access to a high quality education that prepares them to succeed in life, but for too long children in certain parts of Chicago have been cheated out of the resources they need to succeed because they are in underutilized, under-resourced schools," Byrd-Bennett said.

"As a former teacher and a principal, I've lived through school closings and I know that this will not be easy, but I also know that in the end this will benefit our children."

Sandra Leon said she got a tearful call from her grandchildren's kindergarten teacher saying their school was on the list to be closed. Her two grown children also attended the school, and Leon couldn't suppress tears as she waited outside the building for her grandchildren.

"It's been so good for our kids," Leon said. "This school is everything."

Chicago is among several major U.S. cities, including Philadelphia, Washington and Detroit to use mass school closures to reduce costs and offset declining enrollment. Detroit has closed more than 130 schools since 2005, including more than 40 in 2010 alone.

The issue has again pitted Emanuel against the Chicago Teachers Union, whose 26,000 members went on strike early in the school year, idling students for seven days. It has also put Emanuel and Byrd-Bennett at odds with parents, civic leaders and lawmakers, who have blasted the pair during highly charged community meetings throughout the city and at a legislative hearing earlier this week.

Danielle Horton, who learned her son's school is among those slated to close, called Byrd-Bennett the mayor's "hatchet man" and accused her and Emanuel of trying to "rob the community to further a political agenda" that includes expanding the use of charter schools.

Many of the schools identified for closure are in high-crime areas of Chicago where gang violence contributed to a marked increase in the city's homicide rate last year. The district plans to have community groups help students get to their new locations safely.

Among the critics is Eular Hatchett, who lives in the violence-plagued neighborhood of North Lawndale. She walks her 13-year-old nephew DaVontay Horace to school to ensure he gets there safely.

"Our parents know about this area," she said. "They don't know about those other areas. If they send him way north or way south, I'm not going to do that. It's too dangerous."

In addition to the 54 school closures, students at 11 other schools will be "co-located" with existing schools. Six schools have been targeted for academic interventions known as "turnaround.'

CPS says the plan will save the district $560 million over 10 years in capital costs and an additional $43 million per year in operating costs.

The district plans to invest $233 million into what it calls the "welcoming" schools, or the buildings that students in closed schools will be moving to. Those funds will be used for improvements such as air conditioning, upgraded technology and security and to ensure every school has a library.

District officials said they couldn't calculate how many teachers will be laid off as a result of the cuts because school leaders will make decisions about their own budgets.

Many teachers and parents expressed anger and frustration at how the news of the closures trickled out, leaving some to agonize over rumor and conjecture.

"In a word, the approach was brutal. It's certainly not deserved by these parents and these kids," said Mary Visconti, the director of the Better Boys Foundation, a youth organization in the Lawndale neighborhood.

At Lafayette Elementary, where 95 percent of its 483 students come from low-income families, teacher Rosemary Maurello said the principal read teachers a letter from the district Thursday morning saying the school is among those it plans to close. The letter said a final decision would be made in May after more community meetings are held and budget plans are reviewed.

But Maurello said letters and information packets were already being sent to parents and the district's message to teachers included a mention of specific plans to move the Lafayette students to another school about 10 blocks away.

"It sounds like a done deal to me," Maurello said.