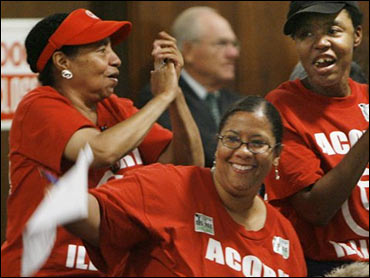 Brushing aside warnings from critics, the Chicago City Council approved an ordinance Wednesday that makes Chicago the biggest city in the nation to require so-called "big box" retailers to pay what boosters of the legislation call a "living wage."

The ordinance, which passed 35-14 after three hours of impassioned debate, requires mega-retailers to pay wages of at least $10 an hour plus $3 in fringe benefits by mid-2010. It would only apply to companies with more than $1 billion in annual sales and stores of at least 90,000 square feet.

Other cities with "living wage" laws include Santa Fe and Albuquerque in New Mexico; San Francisco; and Washington, D.C.

"It's trying to get the largest companies in America to pay decent wages," Alderman Toni Preckwinkle said.

Mayor Richard M. Daley and others have said they believe the big box wage ordinance will drive jobs and desperately needed development from some of the city's poorest neighborhoods and lead giants like Wal-Mart to abandon the city.

He hasn't indicated whether he will veto the measure; it takes 34 votes to override a veto.

Jerry Roper, president of the Chicagoland Chamber of Commerce, said he expects retailers to challenge the ordinance in court.

"The aldermen who voted in support of this ... helped put the sign up really big that development in Chicago is dead," Roper said.

"This (ordinance) imposes special interest mandates that will unfairly deny savings and job opportunities to those who need them most," Michael Lewis, Wal-Mart's senior vice president of store operations, said in a statement. "It's wrong for the City Council to tell the people of Chicago where to shop and to make it harder for inner-city residents to find jobs."

Wal-Mart spokesman John Bisio said earlier that if the measure passed, "We'd redirect our focus on our suburban strategy and see how we could better serve our city of Chicago residents from suburban Chicagoland."

Some aldermen also warned that Target Corp. might rethink its presence in the city —though the Minneapolis-based company has not discussed the issue.

"What you've got to do is help the economy, not hurt the economy," said Alderman Bernard Stone, who voted against the measure.

Chicago has been at the center of the debate about the wages at big retailers ever since the city's rejection of a proposal by Wal-Mart to open a store on the South Side prompted the company to open a store just outside the city limits.

The first Wal-Mart in Chicago itself is set to open in September, and the Bentonville, Ark.-based company has more than 40 other stores within 50 miles of the city.

Wal-Mart said that its average hourly wage is almost $11 an hour in the Chicago area and that the lowest wage that will be paid at the new West Side store will be $7.25 an hour.