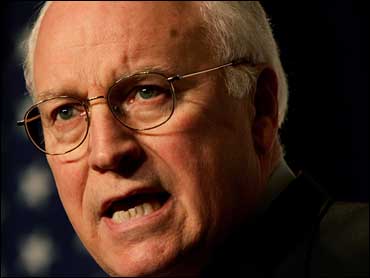 The man accidentally shot by Vice President Dick Cheney on a hunting trip last weekend is out of the hospital.

Harry Whittington, a 78-year-old Texas attorney, called himself a "lucky person," in a statement to reporters Friday outside Christus Spohn Hospital in Corpus Christi, Texas.

"We all assume certain risks in what we do, in what activities we pursue," Whittington said.

"Accidents do and will happen," and that's what happened last week, he said.

Minutes later, Cheney voiced relief at Whittington's recovery at the start of a speech to the Wyoming Legislature.

He thanked lawmakers in his home state for their warm reception, saying, "It's especially true when you've had a very long week. Thankfully, Harry Whittington is on the mend and doing very well."

Whittington, wearing a suit and tie, gave a brief statement and didn't take questions. The evidence of his injuries was clear, reports CBS News correspondent Lee Cowan: His voice sounded tired and the right side of his face and neck were bruised and peppered with small cuts that doctors say resulted from Mr. Cheney's birdshot.

He said the shooting brought "a cloud of misfortune and sadness that is not easy to explain, especially with those who are not familiar with the great sport of quail hunting."

He said he sent his love and respect to Cheney and his family.

"My family and I are deeply sorry for everything Vice President Cheney and his family have had to deal with," he said. "We hope that he will continue to come and seek the relaxation that he deserves."

Whittington was hit in the face, neck and chest with birdshot Saturday during a hunting trip at a South Texas ranch. Doctors said Whittington was in "excellent health" and "good spirits" after suffering a mild heart attack earlier in the week caused by a shotgun pellet that traveled to his heart.

On Thursday, the Kenedy County Sheriff's Department closed its investigation into the incident and said no charges will be filed.

The sheriff's department issued a report that largely supports the vice president's account of the shooting.

Whittington, interviewed in the hospital, assured investigators no one was drinking when the accident occurred and everyone was wearing bright orange safety gear, according to the report.

The vice president spoke publicly about the accident for the first time Wednesday in an interview with Fox News Channel. He said he did not see Whittington until just after he fired on a covey of quail and peppered him with bird shot in the face, neck and chest.

Cheney described it as "one of the worst days of my life" and rejected the notion that Whittington bears any responsibility. "I'm the guy who pulled the trigger and shot my friend," Cheney said.

On Thursday, President Bush said he was satisfied with Cheney's explanation of the shooting.

Mr. Bush added that Democrats are drawing "the wrong conclusion about a tragic accident" when they say it depicts the White House as overly secretive.

The accident happened on Saturday but was not publicly revealed until the next day.