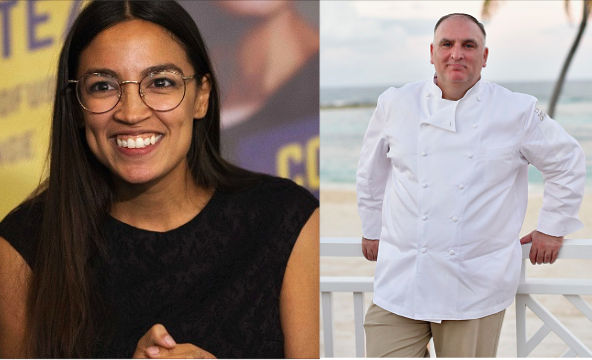 Victorious but a little short on cash, Alexandria Ocasio-Cortez admitted after Election Day that she couldn't afford a Washington apartment before her new job in Congress starts — and the internet went wild. She later tweeted she was "working it out." But celebrity chef José Andrés offered her a place to stay, just in case.

Ocasio-Cortez was quoted in The New York Times last week saying, "I have three months without a salary before I'm a member of Congress. So, how do I get an apartment? Those little things are very real...We're kind of just dealing with the logistics of it day by day, but I've really been just kind of squirreling away and then hoping that gets me to January."

The youngest woman ever elected to Congress was met with both support and a bit of a backlash for her comments, which she later clarified on Twitter Thursday.

The 29-year-old Democrat tweeted, "There are many little ways in which our electoral system isn't even designed (nor prepared) for working-class people to lead. This is one of them (don't worry btw - we're working it out!)." However, people continued to offer their support.

One of those people who offered support was chef José Andrés. The Michelin-starred chef is also famous for his humanitarian work distributing over three million meals to Puerto Ricans after Hurricane Maria devastated the island last year.

"Dear Congresswomen," tweeted Andrés in response to Ocasio-Cortez Friday, "You have a room, a shower, and a plate on my family table for as long as you may be in need of one."

The congresswoman-elect responded to the chef's generosity on Twitter.

"Gracias por su invitación, Señor Andrés," she wrote, "I should be fine on lodging, though I could never turn down a seat at the family table! Thank you for all that you've done for the people of Puerto Rico and our entire country."

Many others have attempted to offer help to the Democrat, but she indicated she would rather have any donations be directed toward Chhaya CDC, an organization that "advocate[s] for the housing needs of New York City's South Asian community," according to its website.

She later tweeted that those looking to donate could also send money to the New York Disaster Interfaith Services (NYDIS), an organization "assisting displaced Puerto Rican families in NYC find new homes after theirs were destroyed."

Ocasio-Cortez has been in the national spotlight since June when she won the primary against 10-term incumbent Rep. Joseph Crowley in a shocking political upset.

She will represent New York's 14th Congressional District, which covers parts of the Bronx, where she was born, and Queens.

What's behind the push for a fourth stimulus check
Danielle Garrand