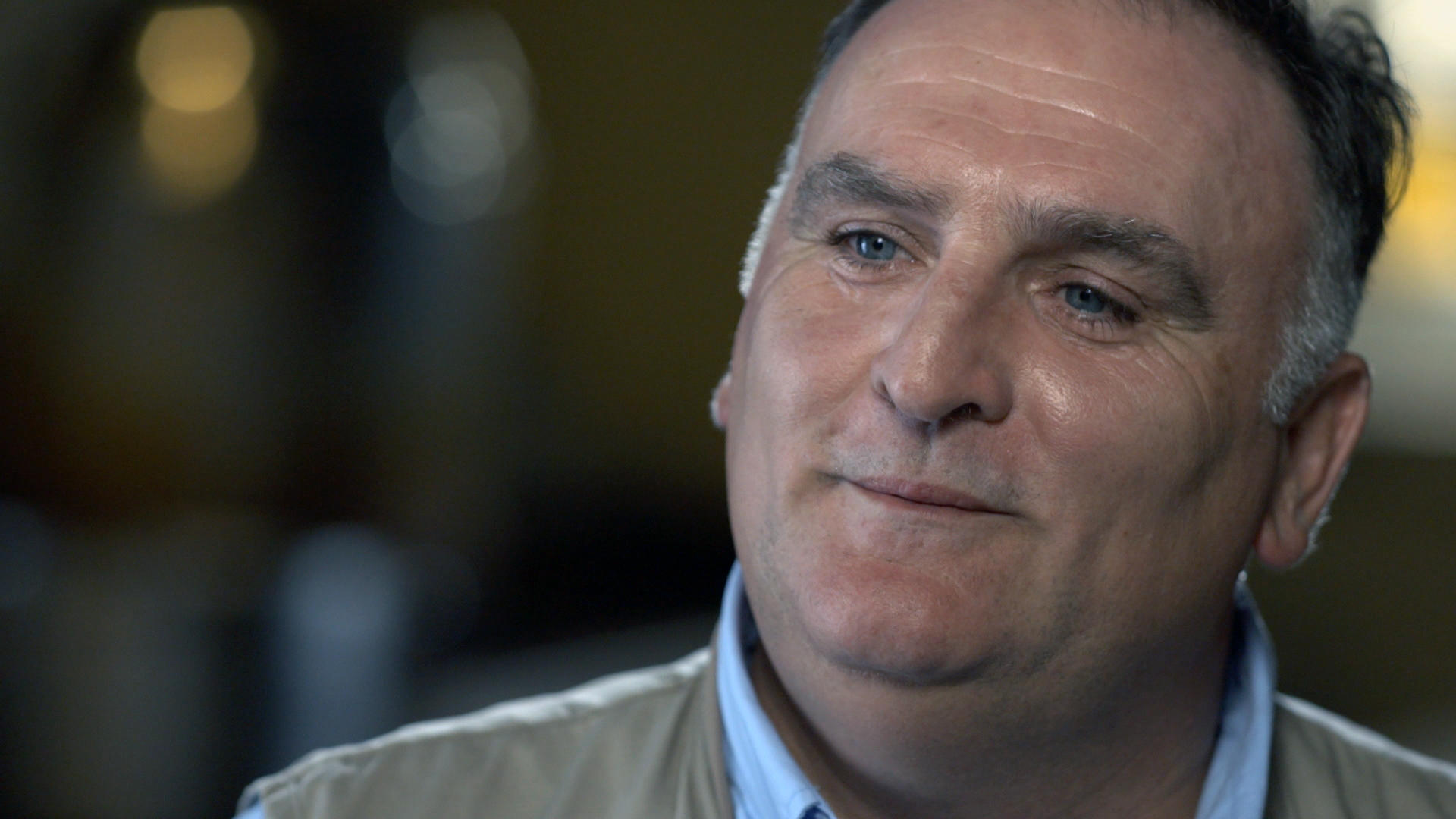 Last week marked the official start of hurricane season. Forecasters predict it will be another active one -- though not as brutal as last year's, when three major storms made landfall in parts of the U.S., including Hurricane Maria, which devastated the island of Puerto Rico. As we first reported in November, chef José Andrés went to Puerto Rico a few days after the storm hit to see how he could help.

He's an expert in avant-garde cooking, not disaster relief, but as soon as he got to Puerto Rico, chef Andrés began doing what he does best. He found a kitchen, bought some ingredients, and began to cook. That first day, Andrés and his small team made about a thousand meals. They recruited an army of chefs and volunteers, and since then, they've served more than three and a half million meals to the hungry people of Puerto Rico.

José Andrés is always on the move. In the kitchen, which has become his base of operations in San Juan, he's a culinary commander rallying his troops.

Preparing meals for so many people is a massive undertaking, requiring trained chefs, thousands of volunteers and assembly lines of sandwiches, 900 on one table alone.

It's all the more remarkable because none of this was set up before José Andrés got to Puerto Rico.

José Andrés: I arrive Monday right after the hurricane. And I ask, "Who is in charge of feeding the people of Puerto Rico?" And they told me, "Everybody. Everybody's in charge." You know, when you have to feed an entire island you need to have one -- one person and one organization responsible.

Anderson Cooper: There has to be a plan.

José Andrés: Has to be a plan, and somebody has to be responsible for achieving that plan.

Andrés came up with his own plan to feed as many of the island's nearly three and a half million people as possible. He started with $10,000 of his own money in cash and pockets full of credit cards.

José Andrés: So for me, it was not difficult. The first thing I do, you're a chef you go and try to find a kitchen. Everybody was saying, 'there's no food, there's no food.' Well, that was not true. The big food distribution companies had food because they had fuel, they had diesel. They kept their refrigerators and the freezers working.

Anderson Cooper: There was food here.

Anderson Cooper: What was the problem?

José Andrés: The problem was the urgency of now. It's a very simple thing when you're a cook. When you're hungry, you gather the food, you gather your helpers, you begin cooking, and then you start feeding people.

He joined up with a local chef named Jose Enrique and other volunteers, cooking enormous pans of paella and stews in a parking lot in San Juan. It wasn't long before they were making more than 100,000 meals a day.

Anderson Cooper: How did you scale it up that quickly?

José Andrés: Well you know one thing when these moments happen we have a tendency to think, "Oh we have to feed three million people" -- almost the idea is impossible.

Ingredients are often improvised; they cook whatever they can buy. Techniques are improvised as well. Jennifer Herrera says a prayer for Puerto Rico as she pours oil into each pan of rice.

The time it takes her to say 'God bless Puerto Rico' is the exact amount of oil she says she needs.

Anderson Cooper: How many blessings do you give Puerto Rico every day?

"Americans should be receiving one plate a day of hot food. That's not too much to ask in America."

With the help of private donations and money from the federal government, José Andrés non-profit organization World Central Kitchen has prepared more hot meals than any of the other bigger, more experienced disaster relief organizations here, like the Salvation Army and the Red Cross.

Anderson Cooper: You're not just giving calories you're giving attention to people.

José Andrés: The calories are obvious, but this is a message of hope. This is a message, "We care and be patient. Things eventually will get better."

That message of hope is one Andrés has been preaching on social media.

Documenting his efforts to expand operations around the entire island. At the height of the emergency, he had eighteen kitchens going at once and used trucks, cars and anyone he could find to deliver meals.

José Andrés: All of the sudden I have Homeland Security helping us deliver sandwiches and water in the most difficult areas of the island. I had cooks from the U.S. Coast Guard helping us, volunteering. We were having so many different men and women coming from the federal government helping us.

There are still plenty of places that need the help. In a community an hour south of San Juan, there's no electricity. This is the first hot meal this family has eaten in more than two weeks.

Andrés' dedication has inspired others in Puerto Rico to set up kitchens of their own. In a church perched in the mountains of Naguabo, Pastor Eliomar Santana and his parishioners cook hot meals for neighboring communities with the rice, beans and sausages Andrés has provided them.

Pastor Santana: We have people here with no water, no-- no lights. They lost everything in their house. And they have stopped thinking on that, for helping others.

Anderson Cooper: So even though some of your parishioners need help they're still volunteering here?

Anderson Cooper: They're still trying to help other people?

Pastor Santana: They're still trying to help other people.

Before delivering the food to a nearby housing project, Pastor Santana thanks God and then José Andrés.

Anderson Cooper: In the church, when you were praying, you thanked God first and second you thanked José Andrés.

Andrés' presence has not been without controversy. He's been critical of the federal government's response to the hurricane and after attending meetings with FEMA -- the Federal Emergency Management Agency -- he called their headquarters in San Juan the most inefficient place on earth.

Anderson Cooper: Was that the frustration? That it was just bureaucratic? That there were a lot of meetings and you felt like things weren't getting done?

José Andrés: We were already feeding 100,000 people a day, and I needed their help to make sure we had money to keep buyin' the food to keep feeding these never-ending needs of people in need. And there is where -- call it red tape. Nothing was happening.

José Andrés: The people of the federal government are great people. But then is red tape that sometimes doesn't allow that same people to be successful. I didn't put the name emergency in FEMA. I didn't. But somebody's gonna have to tell me the meaning of emergency. To me, when we're talking about food and these -- the little thing I know, is that emergency in food means one thing. People are hungry. And when you're hungry it's today.

Anderson Cooper: FEMA says, "Look, to negotiate a big contract there's a bidding process. You have to have three different companies bidding on it. That there's federal government regulations." You say that gets in the way of…?

José Andrés: Americans in Puerto Rico were hungry, and we were not delivering food quick enough. And what we did is we didn't plan. We didn't meet. We began cooking, and we began delivering food to the people in need in Puerto Rico. And what we need to make sure is that next time we are not negotiating contracts. That next time the federal government is ready to do what they are supposed to do next time something like this happens… Maybe an earthquake. Maybe another hurricane. Or maybe a terrorist attack. We need to make sure we are ready because the people of America don't deserve anything less.

José Andrés' passion for disaster relief is a far cry from what excited him when we first met him in his restaurant in Beverly Hills in 2010. Back then he was leading a kind of culinary revolution, pioneering innovations in molecular gastronomy, marrying science with food in surprising and playful ways.

Anderson Cooper: I don't know why I keep doing stories about food, because I don't really eat much and never really think much about food, but it's so interesting to me how for you, food is at the center of everything.

José Andrés: Anderson, food touches everything. Food is in our DNA. Food touches the economy. Food is science. Food is romanticism. Food is health. Food has many of the opportunities to have a better tomorrow.

That philosophy is at the heart of andrés humanitarian efforts around the globe. He founded World Central Kitchen after the earthquake in Haiti in 2010.

José Andrés: I've been here more than 25 times to Haiti.

Last June, months before Hurricane Maria hit Puerto Rico, we met up with Andrés in Haiti's capital Port-au-Prince. He supports an orphanage there and has established a job training program for local chefs. He's also spearheading an effort to reduce the widespread use of charcoal in cooking. Long-term exposure to smoke from cooking indoors on fires kills an estimated four million people worldwide every year, most of them women and children.

Anderson Cooper: I mean, focusing on stoves, on the idea of clean cookstoves is not something that a lot of people think about.

José Andrés: I am a cook. I feed the few, but I've always been super interested in feeding the many. And when I've seen some of these women doing the change from the charcoal to the gas, everything changes around them. When we see these women cooking in the street with charcoal, and we eat the plate of food, we should all be asking ourselves, how that plate of food can really become an agent of change.

Anderson Cooper: An agent of change?

José Andrés: A true agent of change, one plate at a time.

José Andrés spent Thanksgiving in Puerto Rico, continuing to feed people one plate at a time. This has been his biggest undertaking thus far.

He still maintains a small presence on the island as life returns to normal, but he's already thinking about how he can do things better the next time disaster strikes.