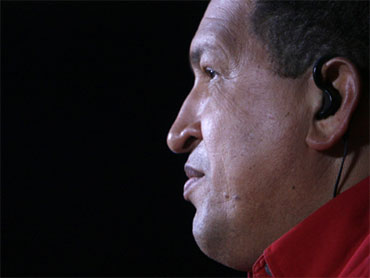 President Hugo Chavez threatened on Sunday to nationalize banks that violate regulations, saying he'll do whatever is necessary to prevent irregularities amid a scandal that already has prompted his government to take over management of four banks.

"I warn the country's private bankers: I'll take away any bank from anyone who slips up," Chavez said during his weekly television and radio program. "Do you want me to nationalize the banks?" Chavez asked, then said he'd have "no problem" ordering state takeovers.

The four banks - Canarias, Confederado, Bolivar and BanPro - account for 5.7 percent of Venezuela's banking sector. The banks were purchased in September and October by a group of investors headed by Ricardo Fernandez, who is involved in the food industry and sells products to a network of state-run subsidized markets known as Mercal.

Fernandez and his lawyer Jose Camacho have been arrested on charges of misappropriating deposits and providing loans to other businesses in which they were investors.

The state-run banking agency has appointed officials to oversee operations of the banks. The National Banking Council, a private banking association, has voiced its support for the government takeover, saying the initiative is aimed at protecting depositors.

Since taking office over a decade ago, Chavez has ordered the nationalization of major players in steel, electricity and oil sectors. His government has also seized control of dozens of other private businesses, including coffee processing plants, sugarcane mills and cattle ranches.