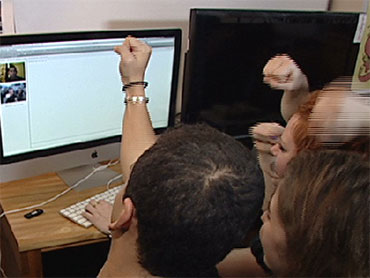 Chatroulette is only three-months-old, but it's already all-the-rage, and sparking controversy.

The social networking Web site and latest Internet craze randomly and repeatedly connects users to strangers from all over the world, via their webcams.

But some child advocates are worried about those strangers could include predators talking to kids, even though Chatroulette clearly says you have to be 16 to use it.

The setup is simple: Activate your webcam and click "play." Then, as people from all over the world pop up one-at-a-time in a box on your screen, you decide whether or not to chat with them. If you don't like the looks of things, click "next," and the site shuffles you to someone new.

As many as 85,000 users are doing it at any particular time, the site says.

And, while some chats are simple and friendly, some students at Purchase College in the northern New York City suburb of Westchester say many users are looking for more than conversation.

"Most of it is pretty obscene," one student observed to CBS News. "If they're not being obscene, they will ask us to do obscene things. But that's the beauty of the 'next' button, because you can just disconnect automatically. They have no idea who you are unless you tell them."

Another student said she "would never actually like physically meet up with anyone from Chatroulette. It's the same danger as meeting someone (from) a chat room."

But it didn't take her long to run into the site's dark side: a man exposing himself. Del Conte looked away.

Del Conte told "Early Show" co-anchor Harry Smith she "was really surprised" by what she found on Chatroulette. "It makes me really discouraged about the state of humanity. Even the people that I thought were cleaner conversations, a lines down, they would offer to disrobe. Someone had said that, on the site, for every one cool person you talk to, you get 25 weirdos or perverts. That's a worse ratio than walking down the street in New York City!"

Ernie Allen, president of the National Center for Missing & Exploited Children, called what's happening on Chatrouleete "a huge red flag. This is extreme social networking. Absolutely random. No limits. Graphic sexual content. This is the last place parents want their kids to be."

What should parents do?

"The first thing you need to do," Allen replied, "is simply make sure the computer is not in their room. Kids don't need a webcam in their room. They can connect with Grandma from a webcam in the living room, family room. Talk to your kids about the risk. This is a place that kids will gravitate to, because it's new, it's extreme, it's outrageous. And parents really need to be aware of this and get involved."

Del Conte pointed out that, "A lot of times, we're getting our kids netbooks to take to school. Netbooks have webcams built in. So, another way to make sure your kids don't do this is block the site on their Web browser.

" … A lot of kids are doing it in groups because they find it funny," she continued. " … But you want to talk to them about what they're seeing, because who does that? Who just exposes themselves to a webcam and then waits for a pervert to come along?"

Allen said he's not aware of any kids who've been harmed as a result of being on Chatroulette, "but this is brand new. There's a lot of illegal activity on this site that's hard to enforce. But we're watching it."

For more on keeping kids and teens safe while they're online, click here.

Help Your Brain Get Better with Time

Kurt Cobain: Not A Suicide?