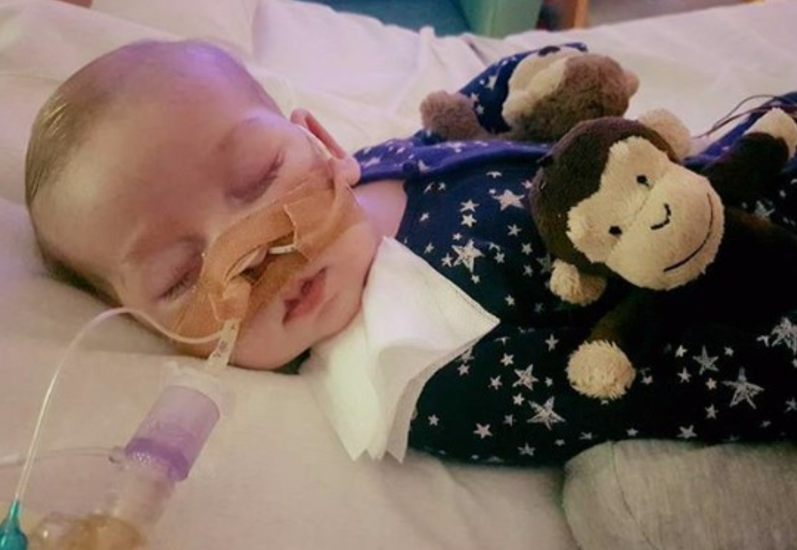 LONDON -- Charlie Gard, an 11-month-old baby at the center of an international dispute over treatment of a rare medical condition, has died in hospice care, a family spokeswoman said on Friday.

He would have turned 1 next week.

His parents, Chris Gard and Connie Yates, raised more than 1.3 million pounds, or $1.7 million, to take him to the United States for an experimental medical therapy they believed could prolong his life. But Charlie's doctors at Great Ormond Street Hospital in London objected, saying the treatment wouldn't help and might cause him to suffer. The dispute ended up in court.

Charlie's case became a flashpoint for debates on the rights of both children and parents, on health-care funding, medical interventions, the responsibilities of hospitals and medical workers and the role of the state.

Alison Smith-Squire, a family spokeswoman, confirmed that Charlie died Friday but no further details were released. In a statement, Yates was quoted as saying "our beautiful little boy has gone, we're so proud of him."

After months of legal battles, High Court Judge Nicholas Francis ruled Thursday that Charlie should be transferred to a hospice and taken off life support after his parents and the hospital that had been treating him failed to agree on an end-of-life care plan for the infant.

Under British law, it is common for courts to intervene when parents and doctors disagree on the treatment of a child. In such cases, the rights of the child take primacy over the parents' right to decide what's best for their offspring. The principle applies even in cases where parents have an alternative point of view, such as when religious beliefs prohibit blood transfusions.

The case made it all the way to Britain's Supreme Court as Charlie's parents refused to accept decisions by a series of judges who backed Great Ormond Street. But the Supreme Court agreed with the lower courts, saying it was in Charlie's best interests that he be allowed to die.

The case caught the attention of Trump and the pope after the European Court of Human Rights refused to intervene. The two leaders sent tweets of support for Charlie and his parents, triggering a surge of grassroots action, including a number of U.S. right-to-life activists who flew to London to support Charlie's parents.

The hospital reported that its doctors and nurses were receiving serious threats over Charlie's case and London police were investigating.

The intervention of two of the world's most powerful men made the case a talking point for the planet. Images of Charlie hooked to a tube while dozing peacefully in a star-flecked navy blue onesie graced websites, newspapers and television news programs.

Medical ethicist Arthur Caplan said the case shows how the medical profession is struggling to adjust to the age of social media, which puts the general public in the middle of decisions that in the past would have been private issues for doctors and the family.

"I do think that in an era of social media, it is possible to rally huge numbers of people to your cause," said Caplan, of New York University's Langone Medical Center. "The medical ethics have not caught up."

The heated commentary prompted Judge Francis to criticize the effects of social media and those "who know almost nothing about this case but who feel entitled to express opinions."

But in the end, the increased attention did little for Charlie.

While offers of help from the Vatican's Bambino Gesu children's hospital in Rome and doctors at Columbia University Medical Center in New York were enough to reopen the case, the High Court ultimately decided the proposed treatment wouldn't help Charlie. His parents gave up their fight on Monday after scans showed that Charlie's muscles had deteriorated so much that the damage was irreversible.

"Mummy and Daddy love you so much Charlie, we always have and we always will and we are so sorry that we couldn't save you," his parents wrote when they announced their decision. "We had the chance but we weren't allowed to give you that chance.

Funeral held for 21 teenagers who mysteriously died at nightclub
Thanks for reading CBS NEWS.
Create your free account or log in
for more features.
View CBS News In
CBS News App Open
Chrome Safari Continue
Be the first to know
Get browser notifications for breaking news, live events, and exclusive reporting.