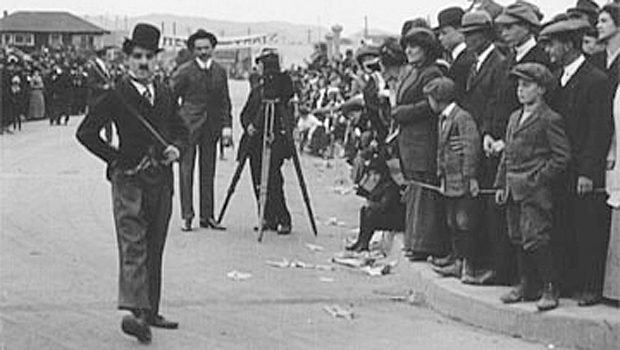 Charlie Chaplin's Little Tramp was born 100 years ago today, in an inauspicious, throwaway short film that amounted to little more than a photobomb -- but it introduced a character that would become the most famous movie icon in the world.

Chaplin had already started filming "Mabel's Strange Predicament," a bedroom farce directed by star Mabel Normand that was the English comic's second film at Mack Sennett's Keystone Studios. [His first was "Making a Living," in which he played a con man.] "Mabel's Strange Predicament" featured Chaplin as a drunk at a posh hotel -- a secondary character to Normand as a woman who finds herself in compromising positions.

In his autobiography Chaplin wrote that his search for props and costume for his drunk came up with a hodge-podge: a too-tight jacket, pants that were too big, a bowler and a cane, as well as a snipped moustache. Together they evoke a character who perhaps had fallen on hard times (though he does wave some cash around, which helps explain why the hotel staff puts up with his loutish behavior). Chaplin's physicality -- his pratfalls a testament to his British music hall background -- stand out in the film, which was his first successful collaboration with Normand.

During a break in production, Chaplin and director Henry Lehrman took two cameras out to Venice, Calif., where the Junior Vanderbilt Cup Races were being held. Chaplin, dressed in his tramp costume, pretended to photobomb a newsreel crew attempting to document the races. [A title card reads: "An odd character discovered that motion pictures were being taken and it became impossible to keep him away from the camera."]

Wandering onto the street in the middle of traffic, or meandering into the camera's sightlines, Chaplin posed and mugged, while the exasperated newsreel crew coerced or physically pushed him out of frame. But Chaplin kept returning, like a curious public newly-entranced by the technology of movies. The crowd in the scene is perplexed, curious, and bemused.

The resulting six-minute short, "Kid Auto Races at Venice," displays some of the key elements of the Chaplin persona that have endured. Unlike the drunk hotel guest in "Mabel's Strange Predicament," the resilient camera hog in "Kid Auto Races" is an underdog who rejects authority, who defies convention . . . in short, a character with whom the audience could identify.

And he was funny.

So while "Mabel's Strange Predicament," released on February 9, 1914, marked the first time Chaplin played his iconic character, "Kid Auto Races at Venice" -- released just two days earlier, on February 7 -- was the first time the public got to see the Little Tramp.

Chaplin made more than 80 films, most featuring his tramp character, including his most successful sound features, "Modern Times" and "City Lights."

You can watch "Kid Auto Races at Venice" (recently restored by the British Film Institute) by clicking on the video player below.