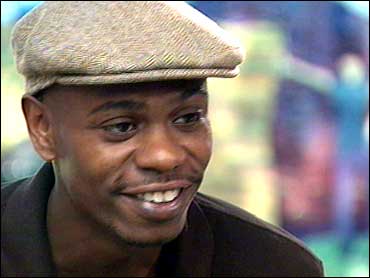 Consider this a warning: Dave Chappelle will probably offend you. But if you've got a thick skin and can take it, you just might find him funny - brilliantly funny.

Chappelle has created some of television's most memorable characters. And, incidentally, he's one of the sweetest people we've ever met. He's a devoted family man and all-around nice guy.

Chappelle started off as a teenage comic looking for a break and became a comedian with his own TV show. He had a subsequent fall from show business after he accused one of the television networks of racism, and then succeeded again, at 31, to fame and fabulous wealth.

And, as Correspondent Bob Simon reported in October, he's signed a two-year deal with Comedy Central that's potentially worth as much as $50 million.

"Wow. Off to Comedy Central. Man, being put in those kinda perspectives, wow," says Chappelle. "Get me a cup of coffee, Bob."

The very popular and very hip "Chappelle Show" is what has made Chappelle rich. It's been on Comedy Central, which is owned by Viacom, the parent company of CBS, for the past two seasons and will run for at least another two more.

There are times when Chappelle's humor can be a little sophomoric. But often, Chappelle's work is deeply cutting, even subversive. Take, for instance, his sketch about a white family in the '50s with an unfortunate "N" word last name.

"A lot of people, both black and white, feel uncomfortable with what they call your overuse of the 'N' word," Simon tells Chappelle. "What do you say about that?"

"To each his own," says Chappelle. "I look at it like that word, 'n-----', used to be a word of oppression. But that when I say it, it feels more like an act of freedom. For me to be able to say that unapologetically on television."

But how would he react if a white comedian used the "N" word?

"I'd be furious," says Chappelle. "That word, if you could sum up the story of America in a word, that might be the word that I'd pick. It has connotations in it that society has never dealt with."

Chappelle enjoys challenging people and making them think. But lots of times, he plays it just for laughs. For instance, his sketch about the late funk musician Rick James has become a classic.

Simon went to visit Chappelle on his 65-acre farm in the cornfields of Ohio, where he lives with his wife and two children. He grew up in Ohio, moved to Washington, D.C., with his mom when his parents divorced, and was only 14 when he started doing stand-up comedy.

He was so good, so natural, that by the time he hit the comedy circuit in New York, the networks came calling, offering sitcoms. His mother, Dr. Yvonne Seon, is a minister and a college professor. She remembers how Chappelle first discovered comedy.

"I think the moment he decided to be a comedian was the day that he had to decide whether or not to sign up for the second week of basketball camp," says Seon. "And he called home. And he said, 'Mom?' He said, 'There are guys here who are bigger than I am. Run faster, jump higher.'"

"Everybody was better than me. But I had them all cracking up. So I figured, let me tweak my ambition," says Chappelle.

What did Seon want her son to do? "I've never been one of these mothers that wanted her children to be anything in particular," she says. "I wanted them to find the path that worked for them."

Chappelle thought that path led to developing sitcoms, but he was wrong. At Dino's Café, in the small Ohio town of Yellow Springs, Simon joined him for coffee and listened to his sad adventures in network television. His first TV deal, at 18, was with the Walt Disney Company.

All together, Chappelle developed 11 television pilots. Only one made air, an ABC show called "Buddies," about two friends in New York -- one black, one white. But it didn't turn out the way Chappelle envisioned it.

"It was a bad show. It was bad. I mean when we were doing it, I could tell this was not gonna work," says Chappelle.

It didn't. "Buddies" got canceled after 13 episodes. Luckily, Hollywood came to the rescue. Chappelle won supporting roles in a number of films, including "The Nutty Professor" and "You've Got Mail." While he was making movies, he was still creating and pitching TV sitcoms, starring himself, which is when the Fox Network called.

"I flew out there for the meeting. And if you can imagine, I was the only black person in the room, and they basically told me that, we'll pick up the show but we want more white characters on it," recalls Chappelle. "For no other reason than they thought it would give the show a more universal appeal. And so I quit."

He walked out of the room after the meeting, and he accused the network of racism. "It was racist. Look, I don't think these people sit around their house and call black people 'n-----s' and all this kind of thing," says Chappelle. "But the idea that, unless I have white people around me on my show, that it's unwatchable or doesn't have a universal appeal, is racist. You know? They don't make them put black people on 'Friends.' Or they don't make them put black people on 'Seinfeld.' But all of a sudden I get in the room, and it's like, 'Where's all the white people?'"

His father died soon after that incident. "This was the beginning of a terrible decline," he says.

It was around this time that Chappelle retreated to his sanctuary in Ohio. He left behind the network TV deals, the cliché movie roles, and the heavy partying. And he left it behind to spend more time with his friends and family and to take a good, hard look at himself.

And figure it out, he did. Chappelle today is one of the hottest comics around, and while his first love will always be stand-up, it was his show on cable that finally allowed him to be creatively free and true to himself.

At a screening room in Manhattan, 60 Minutes sat down with Chappelle and his writing partner, Neal Brennan. They met at a comedy club in Greenwich Village when they were both 17. On screen was one of their best-known sketches, about a white supremacist named Clayton Bigsby, who's both blind and black. Clayton doesn't know he's black, because no one's ever told him. All he knows is that he hates blacks. The climax comes when Clayton's followers, who have never seen his face, urge him to take off his hood and reveal himself.

About that sketch, Chappelle said: "I remember the night before we came on, man, we talked on the phone for a long time. And the sum of the conversation was, 'I'm completely at peace with this. It's edgy, it's scary, it's wild. But I, in no stretch of my imagination, am I like embarrassed about this.' And I can't say that for any of those sitcoms I tried."

"I remember Comedy Central when we showed it, they didn't want it on the first episode, because they didn't think it was exemplary of what the show is," says Brennan. "And that was the most vicious fight we ever had with them, because we were like, 'This is exactly what the show is.'"

The comedian Chappelle reminds most audiences of is Richard Pryor, whose work in the '70s was trailblazing and incendiary. Pryor suffers from multiple sclerosis and is incapacitated. He obviously couldn't talk on camera because he's too ill, but his wife spoke for him and told us that Pryor feels that he has passed the torch on to Chappelle.

"That's more pressure than $50 million. That's a lot of pressure. He was the best, man," says Chappelle. "For him to say that is, you know, that's something, I don't even know if I'll attempt to live up to that."

Between Pryor's praise and Comedy Central's millions, there's more pressure on Chappelle to succeed than ever before. But it's a risk he's willing to take, because even if he fails, as he has failed before, he'll always have Ohio.

And he believes it's a wonderful thing to have at the age of 31.

"If you take these kind of chances, it's absolutely necessary. I mean, you know, I got responsibilities," says Chappelle. "I got real important relationships in my life that are very empowering relationships. I got a lot of positive people around me. I'm cool with failing so long as I know that there are people around me that love me unconditionally. And I got that. So … what do I got to lose?"