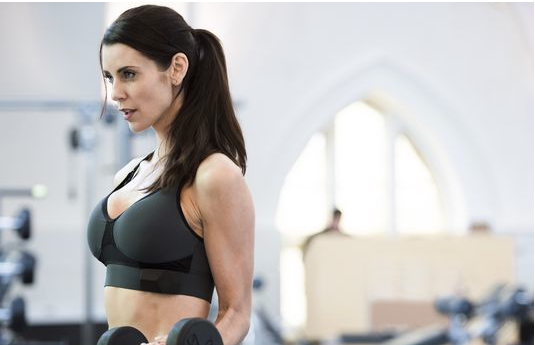 Who needs an Apple Watch or Fitbit to stay on top of those healthy-living New Year's resolutions, when your undergarments can do it for you?

In 2014, the company released a line of smart shirts for men, and now it wants to bring this kind of fashionable, wearable health-tracking tech to women.

"After much applause, and a plethora of requests from eager women who wanted in on the action too, the day has finally come for us to reveal the OMbra," reads an OMsignal blog post, which calls the new product "the ultimate smart bra."

Ideas for a high-tech bra initially sprung up four years ago, but the company wrote that it was "lacking in the apparel design capabilities" to make the product a reality. A team of sports bra designers, scientists, and engineers collaborated on the final design with 1,633 prototypes tried and tested before the final result was settled on.

The company says this is more than just an everyday undergarment -- think of it as a personal trainer you can wear.

It is made with a four-way stretchable fabric that conforms to the shape of the wearer's body while in movement, and can track breathing rate, heart rate, and the number of calories burned during exercise. A black box with sensors is located near the wearer's ribcage on the bra's lower band, recording this biometric data. This information is shared with the OMsignal mobile app and a feature called OMrun designed to help people manage their running performance.

The Biometric Coach that is part of the app lines up your biometric effort with fitness targets you set before the run. The coach can then give you something of a digital pep talk, letting you know that you could have pushed yourself a little harder if you didn't reach your targets.

The downside? Well, this might be in the running to be one of the most expensive sports bras ever. The OMbra comes with a price tag of $149.