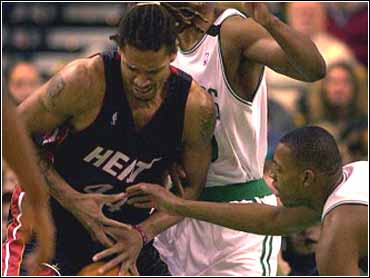 The Boston Celtics stopped their losing streak, and got interim coach Jim O'Brien his first NBA win in the process.

Paul Pierce scored 28 points as the Celtics snapped a six-game losing skid with an 88-76 victory over the Miami Heat on Wednesday night.

"Obviously, I'm thrilled. I'm thrilled for the team and, quite frankly, for me and the coaching staff," O'Brien said.

"They were primed and ripe to play a great game, and they did," Heat coach Pat Riley said. "Everything they set up went in. We just didn't have the disposition to play the Celtics tonight."

Eddie Jones scored 20 points for Miami, which had its three-game winning streak stopped despite a furious fourth-quarter rally.

"They played well against Portland and we should have known they would come at us," said Jones.

But the Celtics stopped the Heat's plans of winning their second game against Boston in five days when Bryant Stith made a 3-pointer from the left corner with 1:59 left for an 83-73 lead.

"I was able to come through when it mattered," Stith said. "Any time you have a big win against a pretty good team, you wnt to use it as a springboard."

The Celtics have won three of their last four against Miami at home.

"They aren't a bad team and they were going to win a game," Grant said. "They were a different team than we saw in Miami intensity wise."