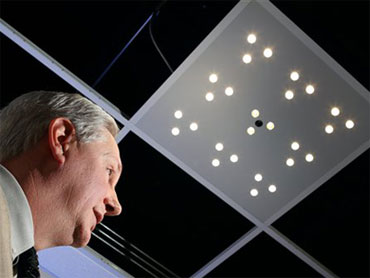 Flickering ceiling lights are usually a nuisance, but in city offices in St. Cloud, they will actually be a pathway to the Internet.

The lights will transmit data to specially equipped computers on desks below by flickering faster than the eye can see. Ultimately, the technique could ease wireless congestion by opening up new expressways for short-range communications.

The first few light fixtures built by LVX System, a local startup, will be installed Wednesday in six municipal buildings in this city of 66,000 in the snowy farm fields of central Minnesota.

The LVX system puts clusters of its light-emitting diodes, or LEDs, in a standard-sized light fixture. The LEDs transmit coded messages - as a series of 1s and 0s in computer speak - to special modems attached to computers.

A light on the modem talks back to the fixture overhead, where there is sensor to receive the return signal and transmit the data over the Internet. Those computers on the desks aren't connected to the Internet, except through these light signals, much as Wi-Fi allows people to connect wirelessly.

LVX takes its name from the Latin word for light, but the underlying concept is older than Rome; the ancient Greeks signaled each other over long distances using flashes of sunlight off mirrors and polished shields. The Navy uses a Morse-coded version with lamps.

The first generation of the LVX system will transmit data at speeds of about 3 megabits per second, roughly as fast as a residential DSL line.

Mohsen Kavehrad, a Penn State electrical engineering professor who has been working with optical network technology for about 10 years, said the approach could be a vital complement to the existing wireless system.

He said the radio spectrum usually used for short-range transmissions, such as Wi-Fi, is getting increasingly crowded, which can lead to slower connections.

"Light can be the way out of this mess," said Kavehrad, who is not involved in the LVX project.

But there are significant hurdles. For one, smart phones and computers already work on Wi-Fi networks that are much faster than the LVX system.

LVX Chief Executive Officer John Pederson said a second-generation system that will roll out in about a year will permit speeds on par with commercial Wi-Fi networks. It will also permit lights that can be programmed to change intensity and color.

For the city, the data networking capability is secondary. The main reason it paid a $10,000 installation fee for LVX is to save money on electricity down the line, thanks to the energy-efficient LEDs. Pederson said one of his LED fixtures uses about 36 watts of power to provide the same illumination that 100 watts provides with a standard fluorescent fixture.

Besides installation costs, customers such as St. Cloud will pay LVX a monthly fee that's less than their current lighting expenses. LVX plans to make money because the LED fixtures are more durable and efficient than standard lighting.

At least initially, the data transmission system is essentially a bonus for customers.

Pederson said the next generation of the system should get even more efficient as fixtures become "smart" so the lights would dim when bright sunlight is coming through a window or when a conference room or hallway is empty.

Because the lights can also change color, Pederson said they could be combined with personal locators or tiny video cameras to help guide people through large buildings. The lights could show a trail of green lights to an emergency exit, for instance.

While Kavehrad and Mathias credited LVX for being the first company in the United States to bring the technology to market, Kavehrad said it trails researchers and consumer electronics companies in Japan and Korea in developing products for visible-light networks.

Pederson's previous company, 911 EP, built high-powered LED roof lights for squad cars and other emergency vehicles. He said he sold the company in 2002. He said the visible-light network grew out his interest in LEDs that goes to the mid-1990s.

The system might include mounting cameras on the light fixtures to bolster the airport security system, but the real attraction is the savings on electricity and maintenance.

"Anything we can do to save costs is worth consideration," he said.

Michael Williams, the city administrator in St. Cloud, said the city had been considering LVX for some time.

"It's pretty wild stuff," he said. "They have been talking about it with us for couple of years, and frankly it took a while for it to sink in."