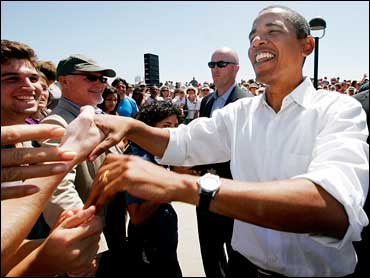 Sen. Barack Obama trails his chief rival for the Democratic nomination, Sen. Hillary Clinton, in the national polls, but the Illinois senator is the first choice of one of America's most popular and influential celebrities.

Talk show host Oprah Winfrey in May announced her support for Obama, and on Saturday celebrated her favorite candidate with a private gala fundraiser at her palatial California estate in the coastal enclave of Montecito.

But, most - 63 percent - do not think the endorsement will make any difference.

WILL OPRAH'S ENDORSEMENT OF BARACK OBAMA
MAKE MOST PEOPLE YOU KNOW…?

(Among registered voters)
More likely to vote for him

31%
Less likely to vote for him

Not surprisingly, Obama supporters are more likely than Clinton supporters to think that the Oprah endorsement will make a positive difference among other voters - 45 percent think so, as opposed to slightly over half who think it will not.

But, a sizable minority of Americans planning to vote for Clinton in their state's Democratic primary said that Oprah's endorsement will make people more inclined to vote for Obama.

WILL OPRAH'S ENDORSEMENT OF BARACK OBAMA
MAKE MOST PEOPLE YOU KNOW…?

(Among Clinton supporters)
More likely to vote for him

29%
Less likely to vote for him