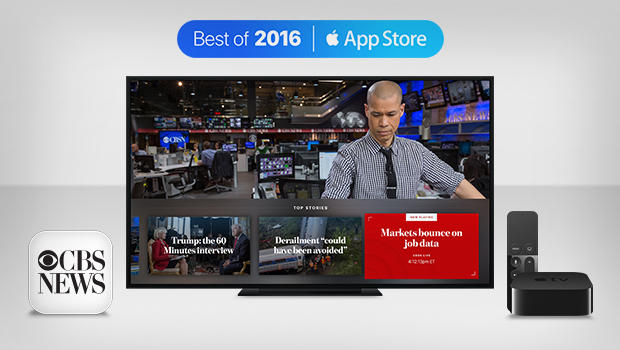 Apple has named CBS News' Apple TV app for tvOS one of the App Store's best apps of 2016 — the only news channel to make the list for the U.S. Each year, the App Store releases its list of the most innovative apps and games apps for all platforms, from the iPhone to the Apple Watch to Apple TV.

"Our Apple TV app represents the future of how viewers will consume and interact with video," Christy Tanner, senior vice president and general manager of CBS News Digital, said back when the app was introduced in July. "We are taking advantage of the platform's cutting-edge, interactive technology to offer a customizable experience."

The CBS News app features an interface that spotlights CBSN's original streaming news coverage and curated video playlists. Beyond that, Apple TV (4th generation) is interactive in that users can tell Siri, "Watch CBS News" to launch the app and start CBSN's live stream. Through the app, you can get breaking news quickly and without interruption.

Beyond the live stream, users can also browse through related videos, bookmark videos to watch later, and subscribe to topics of interest.

"The CBS News app on Apple TV delivers the full breadth of our original reporting and live, anchored streaming coverage combined with a layer of editorial curation, giving news consumers unprecedented flexibility and access to the stories they care about," Nancy Lane, senior executive producer of CBS News Digital, said earlier this year.