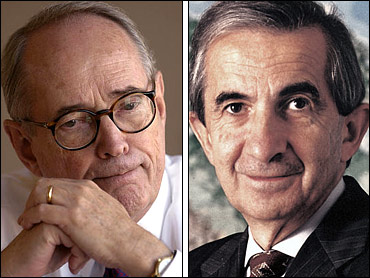 The network this week said documents cited in the 60 Minutes story, which suggested lapses in the president's military record, could not be authenticated. CBS News anchor Dan Rather, the reporter of the story, apologized, while CBS News said the story was a mistake and promised to name an investigative panel.

"The two-person review panel will commence its work this week and will have full access and complete cooperation from CBS News and CBS, as well as all of the resources necessary to complete the task," the network said in a statement. "The panel will report its findings to CBS News and CBS. The findings also will be made public."

The panel was named amid accusations by Republicans of a partisan motive to the CBS News report.

On Tuesday, White House communications director Dan Bartlett accused CBS and a high-level adviser to the Kerry campaign of

A top Kerry campaign official now says Mary Mapes, the producer of the story, put him in touch with Bill Burkett, the former Texas Air National Guard officer who provided the documents to CBS news.

"She said he was interested in talking to me and she gave me his number," said Joe Lockhart, a Clinton White House spokesman who recently joined the Kerry campaign. "I called him. He gave me some advice on how to respond to the Swift Boat smears against John Kerry. We talked about three to four minutes, the guard document issue never came up. And that was the end of it."

Mapes declined Tuesday to discuss the matter. CBS News said in a statement: "It is obviously against CBS News standards to be associated with any political agenda. As to what actually happened here, it is one of many issues the independent review will be examining."

Republicans saw the story as evidence that CBS News was coordinating with the Kerry campaign to attack the president. The chair of the Republican National Committee demanded answers.

Democrats insist it wasn't them – and fired back.

CBS' original Sept. 8 report featured an interview with former Texas Lt. Gov. Ben Barnes, a Democrat who claimed that in 1968 he pulled strings to get young Mr. Bush into the Guard, a popular option for men hoping to avoid the draft and possible service in Vietnam.

The purported memos appeared to answer longstanding questions about a period of Mr. Bush's service in 1972, during which he missed a physical and did not drill for months after he joined an Alabama unit to work on a campaign there.

The questioned documents indicated that Mr. Bush had disobeyed a direct order to appear for his physical, and that friends of the Bush family tried to "sugar coat" any probe of the young lieutenant's lapses.

Questions about the documents surfaced on the Internet soon after the piece aired. CBS stood by its story until last Wednesday, when it said there were some doubts about them and it merited further investigation.

The source of the documents, Burkett, admitted this weekend to CBS that he lied about obtaining the documents from another former National Guard member, the network said. CBS hasn't been able to conclusively tell how he got them or even definitely tell whether they're fakes. But the network has given up trying to defend them.

Burkett had earlier claimed that as a Guard official, he had in 1997 seen allies of then-Gov. Bush discuss destroying military files that might embarrass the governor, who was mulling a presidential run. The allegation has never been proved.

Burkett, in an interview with Rather aired on the CBS Evening News, said he was pressured by CBS to reveal his source for the documents, and "I simply threw out a name that was basically, I guess, to get a little pressure off for the moment."

He said he did not fake or forge any documents.

"I didn't totally mislead you," he said. "I did mislead you about one individual."

Burkett said he also insisted CBS authenticate the documents on its own. Two document experts consulted by CBS later said they raised red flags that network officials apparently disregarded. Rather acknowledged CBS failed to properly determine whether the documents were genuine.

Alex Jones, director of Harvard University's Shorenstein Center on the Press, Politics and Public Policy, said it appeared to be an honest mistake by CBS. But he said the network was too slow to respond.