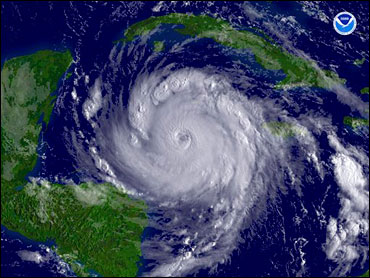 Authorities in the Cayman Islands imposed a curfew and evacuated tourists as the British territory braced for a brush Monday with Hurricane Dean, which has left a trail of destruction across the Caribbean killing at least eight people.

Dean's predicted path has the storm veering south of the Cayman Islands and most likely sparing it from a devastating blow, CBS News' Early Show weatherman Dave Price reported from Cancun, Mexico.

However, the government said it still posed a "significant threat" to the islands. Forecasters said the islands could receive up to 12 inches of rain.

Hundreds of frantic vacationers lined up at ticket counters for special flights home, and many slept on the airport floor. Cayman Islands Gov. Stuart Jack said all but 1,500 tourists had been evacuated from the British territory by Sunday afternoon.

"It's kind of spooky," said George Mitchell, of Detroit, who missed his flight out. "We don't know what to do or where to go. It freaks you out."

The National Hurricane Center in Miami said the first hurricane of the Atlantic season was a powerful Category 4 storm, and could reach the highest level - Category 5, with maximum winds greater than 155 mph - later Monday.

Black Hole Sings In Key Of B Flat

As of 5 a.m. EDT Monday, Dean was about 115 miles southeast of Grand Cayman and about 495 miles east of Belize City. It was traveling west at about 21 mph, the National Hurricane Center said.

In Mexico, travelers also slept on floors at Cancun's international airport, hoping to get one of the last flights out Monday before Dean was expected to slam into Mexico's Caribbean coast.

Nicolas Martignoles, 27, a teacher from Paris, stretched out on the airport floor with friends, prepared to wait all night. "We came to the airport because we are on standby, but all the flights are full, so we are waiting for another flight tomorrow."

In Texas, officials opened emergency operations centers, moved inmates to prisons farther inland and passed out sandbags along portions of the Texas coast as Hurricane Dean barreled toward the warm waters of the Gulf of Mexico.

Dean was several days away and its path was still uncertain, but officials weren't taking any chances. Even if the hurricane continues a steady westward course toward Mexico, parts of the already saturated state could be flooded by the storm's outer bands.

Dean is likely to hit land about 100 miles south of Cancun, Price reported.

Dean killed at least eight people as it moved across the Caribbean but Jamaica avoided a direct hit when the storm wound up passing to the south Sunday night.

There were no deaths reported in Jamaica, but the storm uprooted trees, flooded streets and tore the roofs off many homes, businesses and a prison block. No prisoners escaped.

Police got into a shootout with looters at a shopping center in the central parish of Clarendon, but nobody was hurt, Constable Cheree Greaves said. Assistant Commissioner of Police Linval Bailey said curfews were in effect until Monday evening. Authorities also cut power on the island to prevent damage to the power grid.

The government set up more than 1,000 shelters in converted schools, churches and the indoor national sports arena. Authorities urged people to take cover from the storm, which had maximum sustained winds of 150 mph and could dump up to 20 inches of rain.

But only 47 shelters were occupied as the storm moved in, said Cecil Bailey of the Office of Disaster Preparedness and Emergency Management. More people trickled in later.

George Lee, mayor of the Portmore community near the Jamaican capital Kingston, said appeals to evacuate went unheeded. Some islanders said they were afraid for their belongings if they moved to shelters.

"Too much crime in Kingston. I'm not leaving my home," Paul Lyn said in Port Royal, east of Kingston.

Many tourists who did not get flights out took shelter at places such as Sandals Whitehouse, a resort that has buildings capable of withstanding a powerful storm.

Trinice Tyler, a postal worker from Lake Elsinore, Calif., said she would weather the storm there "on my knees praying."

"I'm celebrating my 40th birthday today, and it's going to be a birthday to remember," she said. "I have mixed emotions. It's exciting, but I'm nervous. Am I going to make it home?"

The hurricane created massive waves and surges up to 20 feet high as it passed the Dominican Republic on Saturday, flooding roads and drowning a boy. At least two people were killed and about 150 homes were destroyed in Haiti, emergency officials said.