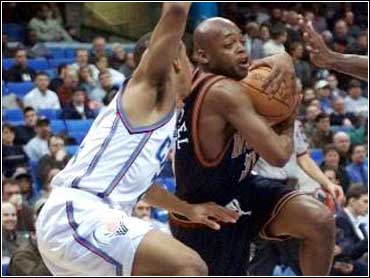 Earl Boykins has always had to prove he could run with the big boys. On Thursday night, the tiny point guard had the biggest game on the floor.

Boykins, a 5-foot-5 point guard, came off the bench to set career highs with 22 points and 10 assists and Lamond Murray added 24 points, sending the Cleveland Cavaliers to an easy 119-101 victory over the Denver Nuggets.

"The small guy against the giant," Cavs coach Randy Wittman said. "The fans root for the smaller guy, but tonight he played like a giant."

Boykins, a Cleveland native whose 10-day contract expired following the game, sparked the Cavs with a solid all-around game, earning a rare standing ovation from the Gund Arena crowd.

"That was unbelievable," he said.

Darting through the lane and underneath some defenders, Boykins scored on a couple of drives. But he did most of his damage on pull-up jumpers, and added a key 3-pointer in the first half to energize the crowd and give the Cavs momentum they never gave up.

Boykins, who was playing in the CBA before the Cavs signed him on Feb. 8, more than doubled his previous career highs of seven points and five assists. He finished 8-of-12 from the floor, and said he will sign another 10-day contract.

With the crowd chanting, "Earl! Earl! Earl!" in the final minute, Boykins scored the Cavs' final seven points, including three on free throws with 12 seconds to go that put him over the 20-point barrier.

"It's unreal to hear everyone chanting for you," Boykins said. "I used to come to Cavaliers games as a kid at Richfield Coliseum and there was never anyone for Cleveland who you could cheer for. It's good that they appreciate you."

Boykins said he wasn't motivated by the fact that his contract had run out.

"I just wanted to go out and play hard," Boykins said. "Because I knew in another 10 days it would bup again."

Even the Nuggets were impressed by Boykins.

"Shoot, he was huge," said Raef LaFrentz, 18 inches taller than Boykins. "They say he only had a 10-day (contract). Shoot, they should sign him for longer than that. He's short but he's a guy with a lot of heart. He's fun to watch."

Andre Miller, starting at point guard for the injured Brevin Knight, added 14 points, 13 assists and nine rebounds for the Cavs.

Wesley Person added 24 points and Danny Ferry 19 for the Cavs, who ran away from the Nuggets while leading scorer Shawn Kemp sat on the bench. Kemp left after picking up his fourth foul with 10:34 to go in the third quarter and the Cavs up by seven.

Antonio McDyess and Keon Clark had 19 points apiece and Nick Van Exel had 15 assists for the Nuggets, who dropped to 4-18 on the road.

Denver was hoping to build off an impressive win at Minnesota Tuesday night but couldn't match its defensive effort.

"We won the game in Minnesota because of our defense," Nuggets coach Dan Issel said. "We sure didn't have that same kind of effort tonight."

With the Cavs leading by six points, Ferry drained a 3-pointer and Van Exel was whistled for a technical foul. After Ferry made the free throw, Miller scored six straight points to put the Cavs up 87-76 and Denver never got closer than 11 the rest of the way.