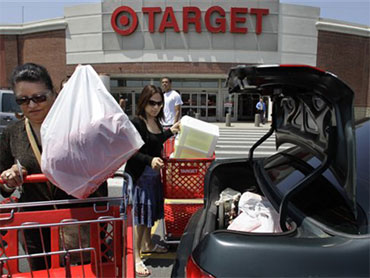 Americans, uninspired by cool weather and feeling fresh concerns about the economy, spent with caution in May after a tepid April.

The International Council of Shopping Center index for revenue at stores open at least a year rose 2.6 percent in May, in line with a reduced growth forecast that ranged anywhere from 2 percent to 2.5 percent.

May's results are being compared with a weak May 2009 that saw the figure drop 4.6 percent.

A mix of stores found business challenging during the month.

Target Corp.'s chairman, president and CEO Gregg Steinhafel, noted in a statement that its recent performance reinforces his belief that we will continue to "experience volatility in the pace of economic recovery." The chain posted a small gain that was below internal forecasts.

Costco Wholesale Corp. reported a gain slightly below Wall Street expectations. Gap Inc. reported a small gain overall, but its namesake chain in the U.S. saw revenue decline. The results are being compared with depressed spending a year ago.

Among the bright spots were Victoria's Secret parent Limited Brands Inc. and T.J. Maxx parent TJX Cos., both of which reported bigger-than-expected increases.

Revenue at stores open at least a year is a key indicator of a retailer's health. Another report from Mastercard Advisors' SpendingPulse showed that shoppers took a pause as they cut back on almost everything from appliances to footwear and clothing at the mall. SpendingPulse measures spending in all forms including cash from May 2 through Saturday.

Cool weather and a quirk in the calendar - a late Memorial Day weekend that hurt May's business but should boost June's figures - dampened spending. But weakness in the past six weeks is due to more than weather and calendar flukes, analysts said. They cited high unemployment, stock market jitters and the dwindling of government-funded rebates on energy-efficient appliances.

The Labor Department reported Thursday that new claims for unemployment insurance fell for the second straight week. But the declines came after a sharp increase three weeks ago, and claims remain at elevated levels.

"May was pretty lackluster. It looked like consumers were coming out of their lethargy. There seemed to be a fledging spending recovery," said Ken Perkins, president of research firm RetailMetrics "But that is called into question."

"I don't think you can explain away all the weakness just based on the calendar shift," said Michael McNamara, vice president of research and analysis for SpendingPulse.

The slim May and April gains, follow a solid first quarter when shoppers opened their wallets more and showed more willingness to pay full price as they took comfort in a rallying stock market and signs of economic recovery. But fears that a debt crisis in Europe could hammer global growth are causing heavy declines on Wall Street and raising concern that the inroads made in the U.S. economic recovery could unravel.

The Conference Board's consumer confidence index improved in May for the third straight month, though it remained below what's considered healthy. While the measure included volatile days on Wall Street, it excluded the 376-point plunge on May 20, its worst one-day drop in more than a year. Now there's concern confidence could fall back if stock declines continue.

The Dow fell 7.9 percent for the whole month, its worst May since 1940. Now economists worry that businesses will limit hiring.

Robert Yerex, an economist at Kronos, a work force management company that tracks hiring among 69 large retailers, said stores didn't hire as many workers in May as April. "There's concern about a double-dip recession," he said.

Target said revenue in stores open at least one year rose 1.3 percent in May as consumers came to the cash register more but spent less on each trip. The results fell short of the company's own expectations but edged above analyst expectations of a 1.2 percent gain, according to a survey by Thomson Reuters.

Target forecast that the key revenue measure will be up in the low single digits for the current month. Roxanne Meyer, a UBS analyst, noted in a report that Target's subdued outlook likely reflects increasing pressure from rival Wal-Mart Stores Inc.'s stepped-up discounting.

Gap Inc. had a 1 percent increase, helped by business overseas, a little better than what analysts had expected. It's namesake business in North America was down 2 percent compared with an 11 percent drop a year ago.

Teen retailers continued to struggle as many young customers can no longer depend on their parents to help them finance clothing purchases. Their customers are also facing grim job prospects. Abercrombie and American Eagle both had a 3 percent drop.

Limited, however, enjoyed a 5 percent increase in May.