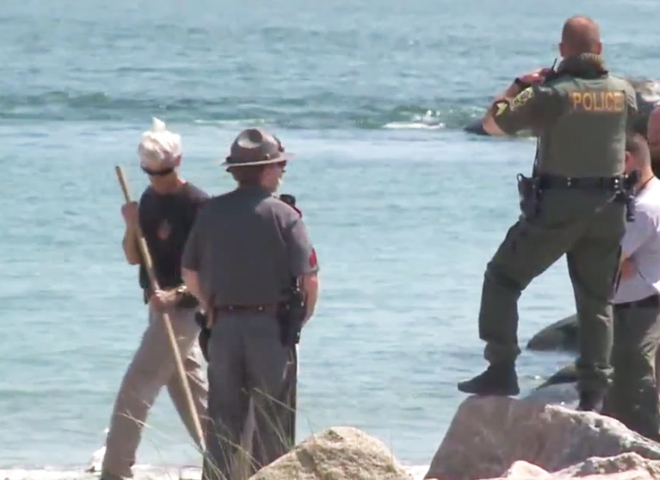 PROVIDENCE, R.I. -- Scientists say the mysterious blast on a Rhode Island beach was very likely caused by the combustion of hydrogen gas built up because of a corroded copper cable under the sand.

The blast at Salty Brine beach in Narragansett was so strong that Kathleen Danise was hurled from her beach chair near the water line and thrown against a rock jetty 10 feet away. Danise, 60, of Waterbury, Connecticut, suffered two fractured ribs and bruises, her family said.

Witnesses that morning said they heard a rumbling and loud bang that sounded like a large firecracker, a grenade or a gas explosion, and noticed a sulfur or butane smell.

The blast left behind a rift in the sand and little else.

Rhode Island Department of Environmental Management Director Janet Coit announced the cause Friday, nearly two weeks after the blast sent a woman flying into a jetty.

Coit says scientists at the University of Rhode Island pinpointed the cause to a hydrogen blast. An abandoned copper cable that was previously used by the U.S. Coast Guard ran under the sand.

"I'm grateful to the extraordinary scientists at URI, especially the team from the Graduate School of Oceanography, whose hard work led to this explanation," said Gov. Gina Raimondo.

Coit says scientists took core samples of the beach sand where the incident occurred and the sand at the site of the incident had unusually high levels of hydrogen.

Home prices are expected to keep rising next year: Here's where
Thanks for reading CBS NEWS.
Create your free account or log in
for more features.
View CBS News In
CBS News App Open
Chrome Safari Continue
Be the first to know
Get browser notifications for breaking news, live events, and exclusive reporting.