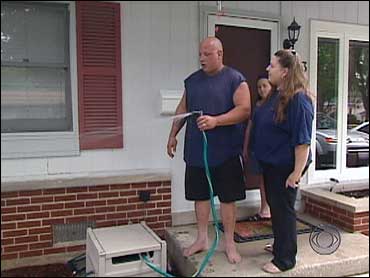 Carl Donovan is one of the millions of Americans caught up in the mortgage meltdown because they can't borrow any more money.

"I don't know how I'm going to get out of this," he tells CBS News correspondent Cynthia Bowers. "I don't want to go backwards."

Donovan bought his suburban Chicago home 15 months ago using an adjustable rate mortgage. Since then, he's seen it skyrocket four points and his monthly payment go up by almost $700 a month — and it could go even higher.

"If I don't find somebody to refinance my house, I'm going to lose it," he told Bowers.

But he can't refinance because the stock markets jitters have made lenders nervous.

What started as a credit crunch for only the riskiest borrowers, the so-called sub-prime market that made up 20 percent of mortgages last year, has spread so far that it's harder for everyone to get a loan — even those with good credit.

That group includes first-time buyers like Cary and Camelia Moncrease, who thought they'd done their homework.

"When it was time to get ready to close and sign the papers, they told me the interest rate had went up," Camelia said.

Meaning the payment on their South Side Chicago duplex would be $500 more a month than they thought. They got lucky: The developer, eager to make the sale, dropped the price — making it possible for them to get into their dream home.

Meanwhile, the Donovans wonder how much longer they'll be able to stay in theirs.