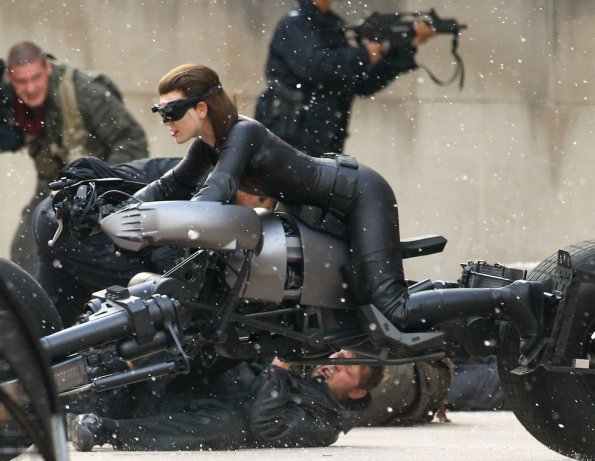 (CBS) A stunt double dressed as Catwoman crashed into an IMAX camera while filming "The Dark Knight Rises" in Pittsburgh on Friday.

The accident happened while shooting a scene outside a building at Carnegie Mellon University, which, TMZ reports, is supposed to be Gotham City Hall in the film.

The unnamed castmember, dressed in Catwoman's bodysuit, appeared to be driving a two-wheeled "Batpod" down the building's stairs when she barreled into the equipment.

No one was hurt during the incident, according to TMZ, but the camera appeared to be destroyed.

Meanwhile, Anne Hathaway, who plays Selina Kyle/Catwoman in the film, is defending her character's costume, which drew mixed reactions when it was unveiled last week.

"What I am happy to say is: If you didn't like the photo...you only see about a tenth of what that suit can do," she told MTV News. "And if you did like the photo, you have excellent taste."