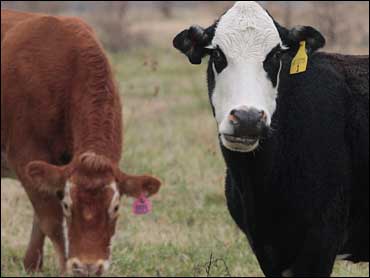 (CBS/AP) DARTMOUTH, Mass. - Cows are not unheard of now and then on Massachusetts roadways - but it's usually in the rural western part of the state.

But on Monday morning, rush hour was slowed in southeastern Mass. on Interstate 195 in Dartmouth, by a couple of cows in no mood to rush anywhere.

State police say they received a report at about 7:30 a.m. Monday of two bovines in the eastbound lanes of I-195.

Troopers called a local farmer, and cruisers slowed traffic as he loaded the cows into a truck and removed them from the area within about an hour.