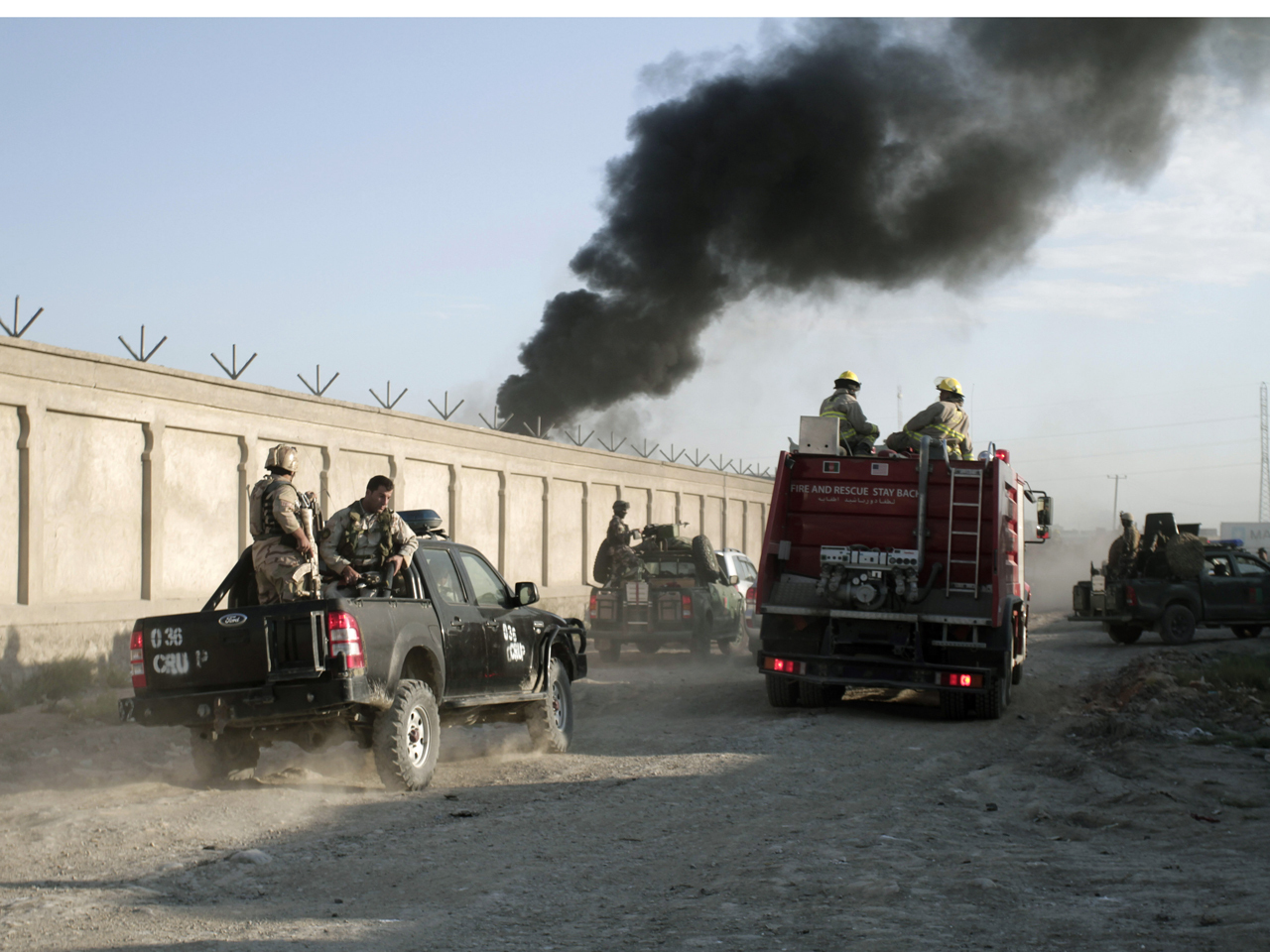 Kabul provincial police chief Mohammad Ayuob Salangi said the powerful car bomb blew up at about 4:30 a.m., leaving a deep crater at the first gate leading into the camp. Two truck drivers who were waiting to enter the area were killed in the blast, he said.

Three other suicide attackers wearing explosive vests then began fighting with guards; all were killed. Salangi said the guards killed were all Nepalese contractors.

The Taliban later claimed it carried out the assault.

Salangi said the attack is being investigated.

The Reuters news service says the facility that was hit is a foreign logistics and supply company used by a number of foreign companies supplying NATO forces in Afghanistan. Many foreigners from different countries visit the site, says CBS News' Ahmad Mukhtar.

It happened after the Interior Ministry announced Monday that insurgents had killed nearly 300 Afghan local and national police in one month, illustrating how casualties among local forces are mounting now that NATO-led coalition troops have handed over responsibility for combat operations.

Interior Ministry spokesman Sediq Sediqqi told reporters that 299 police were killed in the last month, and another 618 were wounded. The Defense Ministry said it did not have monthly figures for the number of Afghan soldiers killed.

In the same time span, Sediqqi said 753 militants were killed in joint operations with the military and others, and more than 300 were arrested. Also, 180 civilians were killed.

Sediqqi did not provide comparison figures from previous months, but according to an Associated Press count, the violence this year is similar to its highest levels in nearly 12 years of war.

According to an AP count, 807 Afghan security force members -- including soldiers and police -- and 365 civilians have been killed so far this year through the end of May. A total of 63 coalition troops were also killed in that span.

Last year through the end of May, Afghan security forces lost 365 soldiers and police, and 338 civilians were killed. Coalition forces lost 177 troops during that time.

"That's where we have lots of fatalities," he said.

Even as he spoke, a regional police commander and three of his men were killed when their vehicle hit a roadside bomb in the country's north.

Baghlan provincial police spokesman Jaweed Basharat said district commander Habinul Rahman was killed when the bomb exploded next to his vehicle while on patrol Monday morning.