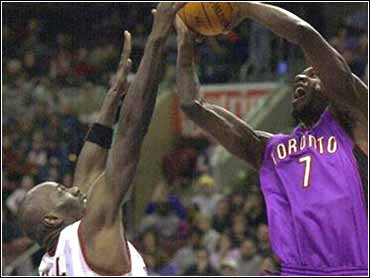 Allen Iverson wound up with the bigger total. Vince Carter walked away with the win.

Carter scored 39 points and the Toronto Raptors overcame Iverson's 51 points and two big deficits to rally past the Philadelphia 76ers 110-106 in overtime.

"That was fun, the kind of game you want to be in," Carter said. "Of course, it's always better if you win."

Iverson returned to the lineup after missing Friday night's win against New Jersey because of a bruised left knee. He shot 20-for-40 and scored all 10 of the Sixers' points in overtime.

"I thought it was a bad sign because everyone was deferring to him," Brown said. "Too many times we kept throwing it to Allen and running away from him."

Raptors coach Lenny Wilkens was happy with his team's defense, despite Iverson's barrage.

"He (Iverson) is not going to beat us on his own," said Wilkens. "We want to shut down the other guys."

Toronto won its third in a row and stopped Philadelphia's five-game winning streak.

The Raptors used a 21-0 run as they rallied from a 20-point second quarter deficit. Trailing 93-83 in the fourth quarter, they scored 13 straight points.

"We let them off the hook and it snowballed on us," said Philadelphia's George Lynch. "We were fortunate to get it into overtime."

In overtime, the Raptors took a 105-100 lead with 2:22 left. Iverson then went the length of the floor for a fastbreak layup and, after a foul shot by Toronto, he made a tough jumper from the lane to pull the Sixers wthin 106-104 with 42 seconds left.

Alvin Williams and Carter came back with jumpers to clinch it for the Raptors.

Keon Clark shot 10-for-14 and scored a season-high 23 points for Toronto. Williams added 14 points and Mark Jackson had 13 assists for the Raptors.

Aaron McKie scored 15 points and Theo Ratliff had 11 points and 13 rebounds for Philadelphia.

A 3-pointer by McKie with 30 seconds remaining in regulation tied it at 96. The Raptors had two shots to win in the final seconds but Jackson missed an 18-footer and Williams was off on a hurried 10-footer after he got the offensive rebound.

"I thought once we got it to overtime, we'd make a stop but we never did," said Lynch.

Carter's tip-in gave the Raptors a 94-93 lead with 1:19 left. He also hit a 20-footer that extended Toronto's edge to three with 43 seconds remaining.

Philadelphia started strong in the fourth quarter, scoring the first 10 points to open up an 89-78 lead. Iverson had seven points during the spurt as the Raptors were held without a field goal for the first 4:13 of the period and missed their first seven shots.

The Raptors scored the last four points of the first half and the first 17 of the third quarter, including four acrobatic alley-oops, including a one-handed jam by Carter on a pass by Jackson.

The Sixers were held without a field goal in the first 5:38 of the second half, missing their first 11 shots. Only a long 3-pointer by Iverson at the buzzer allowed Philadelphia to hold a 79-78 lead after three quarters.