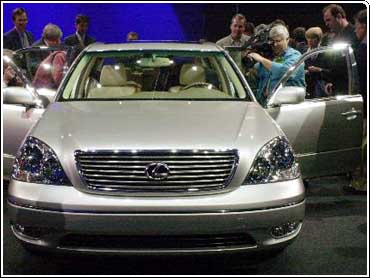 The world's automakers are gathered in Detroit for the North American International Auto Show, which showcases their concept cars and looks toward the future.

And as CBS News Consumer Correspondent Herb Weisbaum reports this year's main attraction can be summed up in three words: sport utility vehicles.

It's the biggest and one of the oldest auto shows in the country. This is where manufacturers from around the world show off their freshest ideas and hottest new models such as the Pontiac Aztek, a rugged new vehicle that's part sport utility, part minivan.

Toyota's new Sequoia is based on the company's Tundra pickup. It's bigger than a 4-Runner but smaller than a Land Cruiser.

Ford will soon have a total of six, including the Escape, due out in the fall. It features a pullout rack, which greatly increases how much stuff you can carry on the outside of your vehicle. The Sport Trac is part pickup, part Explorer. Ford says it's aimed at younger buyers who need a vehicle with lots of flexibility.

But Ford certainly isn't the only company thinking about new ways to package SUVs. The Avalanche, coming early next year from Chevrolet, takes the idea of combining a pickup and a sport utility vehicle another step. A door at the back of the passenger compartment lets you trade seating for extra cargo space when you need it.

And if you're looking for something with attitude, it might be hard to beat the Hummer. And if the current version is too much truck, just wait two or three years and you'll be able to buy something smaller and more civilized than the original. But it still has that what some might call a macho high-tech military feel.

"Gen-X and the boomers love SUV's, they're their favorite vehicles. And as a buying group they're pretty big and they're gonna be interested in sport utes for a long time," says Hall.

The show not only boasts SUVs and trucks, but plenty of new vehicles as well. There's the brand new Ford Focus, recently chosen as North American Car of the Year.

Ford also unveiled a new safety feature, a side air bag curtain that it hopes to have in all of its sport utility vehicles within five years. The curtain is designed to protect driver & passengers in side-impact and rollover crashes.

Some other notable newcomers include Toyota's new entry-level car, the Echo. And the new flagship of the Lexus line when it arrives in October, the LS-430, will have features like rain-activated windshield wipers, seat coolers and a sunshades that covers up the rear window.

You cn't go to the auto show without a look at a few concept vehicles, cars and trucks you can't buy at any price, at least not anytime soon.

There's the Honda Spocket. It's a convertible that really converts into a tiny truck. Chevrolet rolled out a retro look with the SSR. It's part pickup, part roadster. And Buick's LaCrosse answers to your command...literally. Tell it to close the hood or open the doors, and it does.

And finally, something very special is coming from Rolls Royce: the limited edition Corniche convertible, for only $360,000. It is only going to make and sell 100 of those in the United States, so you had better not procrastinate!