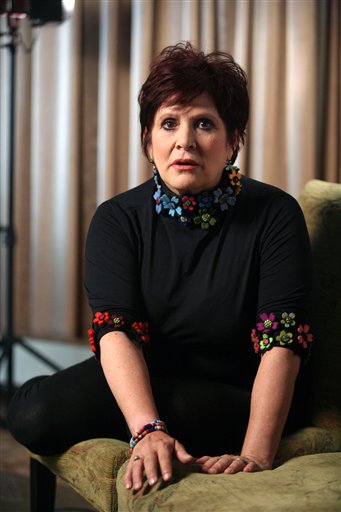 Carrie Fisher usually kicks off her one-woman show with a delightful story about finding a dead guy in her bed.

Then she asks the audience if they have any questions.

Some eventually do, after getting over their shock and nervousness. Among some of the queries she's been asked: How did you know he was dead?

"Have you ever seen a dead body?" she'll answer. "They're blue and yellow _ which are the international colors of death _ and they're really bad conversationalists."

One audience member once wanted to know if Fisher was nude at the time. "I tell them I haven't been naked in 15 years and I haven't been sleeveless in 20," she says.

As you might guess, Fisher isn't exactly coy when it comes to revealing details about her unusual life, whether its drug addiction, mental illness, failed relationships or her days wearing hair bagels in "Star Wars."

Her show, "Wishful Drinking," which she's performed on and off across the country since 2006, was turned into a book and makes its way to Broadway this month.

"People relate to aspects of my stories and that's nice for me because then I'm not all alone with it," the soon-to-be-53-year-old says in an interview. "Also, I do believe you're only as sick as your secrets. If that's true, I'm just really healthy."

Little is off limits every night: She discusses the scandal that engulfed her superstar parents, Debbie Reynolds and Eddie Fisher (he ran off with Elizabeth Taylor); her brief marriage to singer Paul Simon; the time the father of her daughter left her for a man; and the day she woke up next to the dead body of a platonic friend who had overdosed in her bed.

Many of the stories are surreal, like the anti-drug counseling she got from none other than Cary Grant, or the time George Lucas told her Princess Leia couldn't wear a bra because "there is no underwear in space."

"I've gotten to a place where these things are stories," she explains. "Now I'm at a distance and I can talk about them and I can try to perform magic _ to alchemize this vulnerable, painful stuff and make you laugh."

During the interview in her room at an upscale hotel, Fisher sits on a sofa with her bare feet tucked beneath her. She has been snacking on Brie and crackers and she uses a drinking glass to snuff out her cigarettes. There is glitter around her eyes and cheeks, a product of last night's preview performance.

As on stage, she's brutally honest about everything, from tough stuff like how electroshock therapy helps her bipolar disorder to her lighthearted belief that she has the power to turn lovers both gay and bald. The only time she flashes anger is at critics who nastily say Princess Leia has aged poorly since her time in a bikini and chained to Jabba the Hutt.

"I'm sorry I didn't eat just lettuce and sunflower seeds," she says. "Here's what I'll do: I'll stop eating, stop the meds and you can come visit me in a mental hospital, where I'll be really super thin and probably wearing the metal bikini."

Fisher says she approached all the people she names in the show, explained how they are described and offered to take those sections out if anyone balked.

"Basically, it's not worth doing anything if you're going to make someone unhappy or uncomfortable. I'm not in the business of that _ even though it might seem like that," she says.

Todd Haimes, the artistic director of the Roundabout Theatre Company, which is producing the show, says there's no sense of a fourth wall when it comes to Fisher's show.

"The way that she deals with the problems in her life is to confront them," he says. "And she confronts them publicly. I thought it would be an extraordiary journey for the audience to go through."

Fisher, who made her feature film debut opposite Warren Beatty in the 1975 hit "Shampoo," has also appeared in "Austin Powers," "The Blues Brothers," "Charlie's Angels," "Hannah and Her Sisters," "Scream 3" and "When Harry Met Sally ..."

In 1987, Fisher's thinly veiled autobiography "Postcards From the Edge" became a best seller and she turned it into a screenplay for a film version starring Shirley MacLaine and Meryl Streep. Three more books followed: "Delusions of Grandma"; "Surrender the Pink"; and "The Best Awful." Now she's written something that isn't veiled at all.

"I think I show you the ordinary part of what is otherwise considered to be an extraordinary lifestyle. Not life _ lifestyle," she says. "I know most people know that celebrity isn't all glamour and fun but I also think they don't truly believe that."

So has she revealed all her dirty secrets?

Does that mean there could there be a sequel in the works?