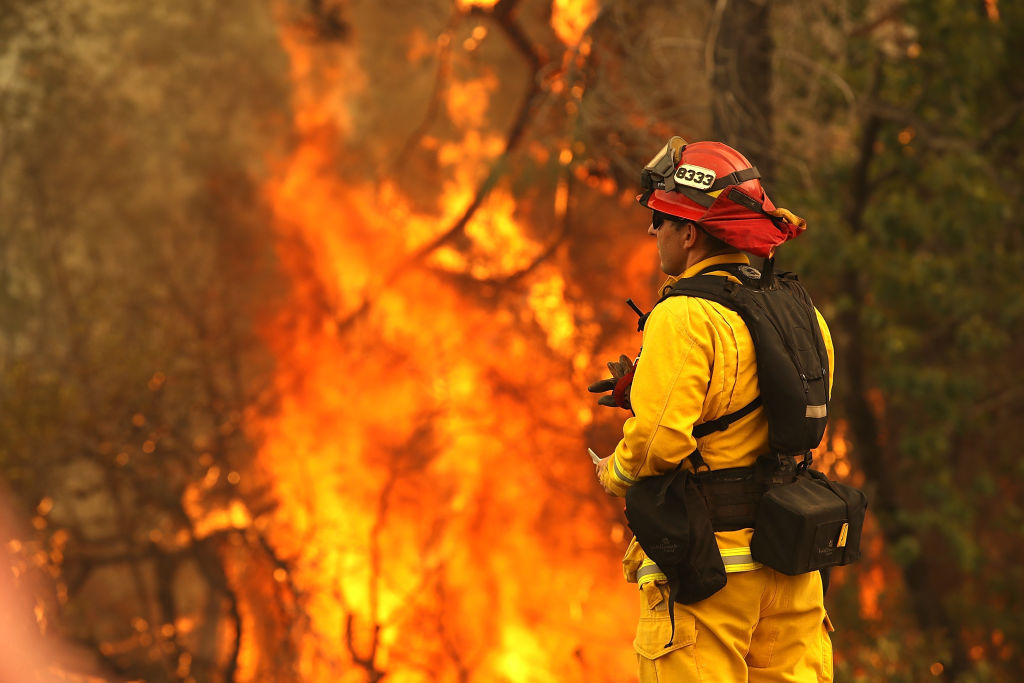 REDDING, Calif. — The deadly Northern California Carr Fire that has forced tens of thousands of people to flee their homes slowed down Sunday after days of explosive growth, giving officials hope even as they announced the discovery of a sixth fatality. Officials said there were more than 150 engines on the way from out of state to help.

Meanwhile, officials said a second firefighter died fighting a huge blaze to the south near Yosemite National Park. Brian Hughes, 33, was struck by a tree and killed while working as part of a crew removing brush and other fuel near the so-called Ferguson Fire's front lines, national parks officials said.

In Redding, officials stuck a hopeful tone for the first time in days.

"We're feeling a lot more optimistic today as we're starting to gain some ground rather than being in a defensive mode on this fire all the time," said Bret Gouvea, the California Department of Forestry and Fire Protection's incident commander on the blaze around Redding, a city about 230 miles north of San Francisco.

Gouvea spoke at a news conference with fire and law enforcement officials. Shasta County Sheriff Tom Bosenko said authorities found a sixth victim of the blaze at a home that was consumed by flames, though he declined to say where. The victim's identity was not released.

The sheriff's department is also investigating seven missing persons reports, Bosenko said. Redding police have an additional 11 reports of missing people, though many of them may simply not have checked in with friends or family, said Redding police Sgt. Todd Cogle.

The so-called Carr Fire that affected Redding -- a city of about 92,000 people -- was ignited by a vehicle problem Monday about 10 miles west of the city. On Thursday, it swept through the historic Gold Rush town of Shasta and nearby Keswick fueled by gusty winds and dry vegetation. It then jumped the Sacramento River and took out subdivisions on the western edge of Redding.

Anna Noland, 49, was evacuated twice in three days before learning through video footage Saturday that the house she last saw under dark and windy skies had burned. She planned to stay at a shelter at Simpson College in Redding while she searches for another place to live. "I think I'm still in shock," Noland said. "It's just unbelievable knowing you don't have a house to go back to."

The latest tally Sunday night showed at least 874 structures destroyed and another 175 damaged. The fire had consumed 149 square miles and was threatening more than 5,000 structures. It was 17 percent contained.

After days of fortifying the areas around Redding, fire crews were increasingly confident that the city would escape further damage. The fire had not grown inside the city limits since Saturday, Gouvea said.

Some of the 38,000 people forced to evacuate said they were frustrated because they didn't know whether their homes were standing or were destroyed. Authorities had not reopened any evacuated neighborhoods where fires raged due to safety and ongoing investigations and urged people to be patient, saying they would soon let residents back.

Fed up, on Sunday morning Tim Bollman hiked 4 miles on trails up steep terrain to check on the Redding home he built for his wife and two sons 13 years ago. He found rubble.

"There's not even anything to pick up," he said. "It's completely gone."

He took hundreds of photos, recorded video and texted his wife.

"It's the craziest frickin' thing you have ever seen," he said, his eyes filled with tears. But then he composed himself.

"It is what it is," he sighed, and then hiked off.

Keswick, a mountain town of about 450 people, was reduced to an ashy moonscape of blackened trees and smoldering rubble. The San Bernardino County Fire Department was called in to tamp down smoking piles of debris that were scattered around the town amid downed electricity lines.

"What we're seeing here is an incomplete burn situation," Capt. Doug Miles said as his crew used picks, shovels and rakes to open up piles that just days ago were family homes. The flames laid waste to about 25 blocks, and the "mop up" work was likely to take days. He said his crew would be looking for anything salvageable, but there was little left standing.

The fatalities included two firefighters and a woman and her two great-grandchildren.

"My babies are dead," Sherry Bledsoe said through tears after she and family members met Saturday with sheriff's deputies.

Her two children, 5-year-old James Roberts and 4-year-old Emily Roberts, were stranded with their great-grandmother, Melody Bledsoe, 70, when flames swept through the family's rural property Thursday on the outskirts of Redding.

The sixth victim, who was not identified, did not evacuate despite receiving an evacuation warning, Bosenko said.

It is the largest fire burning in California.

The firefighters killed in the blaze included Don Ray Smith, 81, of Pollock Pines, a bulldozer operator who was helping clear vegetation in the path of the wildfire. Redding Fire Inspector Jeremy Stoke was also killed, but details of his death were not released.

The fire around Redding was among 17 significant blazes in the state on Sunday that had forced roughly 50,000 people from their homes, said Lynne Tolmachoff, a Cal Fire spokeswoman.

About 12,000 firefighters were battling the fires, she said.

"We are well ahead of the fire activity we saw last year," she said. "This is just July, so we're not even into the worst part of fire season."

Tom Mahan, a retired hotshot, helped save a friend's home, and still seemed in shock.

"Homes were exploding, cars were exploding and I have a wife and kids and I said, 'I better FaceTime my wife just in case,'" Mahan said last week. "I didn't let her know why I was doing it but I wanted to see her face one more time."

"It's a difficult fire to deal with," Austin said, noting the weather was hot and the terrain rugged.

Authorities also issued evacuation orders in Napa County, famous for its wine, when a fire destroyed eight structures. The blaze had blackened 150 acres, but was 50 percent contained Sunday.

Hughes, the firefighter killed near Yosemite, was originally from Hawaii. He had been with California's Arrowhead Interagency Hotshots for four years and reached the rank of captain. Earlier this month, firefighter Braden Varney was killed when the bulldozer he was operating overturned while he was fighting the flames near the national park. At least seven other firefighters have been injured since that blaze broke out July 13.

Some evacuations were lifted but officials said Yosemite Valley, the heart of tourism in the park, will remain closed until August 3.

A big fire continued to burn in the San Jacinto Mountains east of Los Angeles near Palm Springs, but officials lifted evacuation orders for several communities after reporting significant progress by firefighters. The Yosemite and Southern California blazes had burned nearly 100 square miles.

Carter Evans contributed to this report.