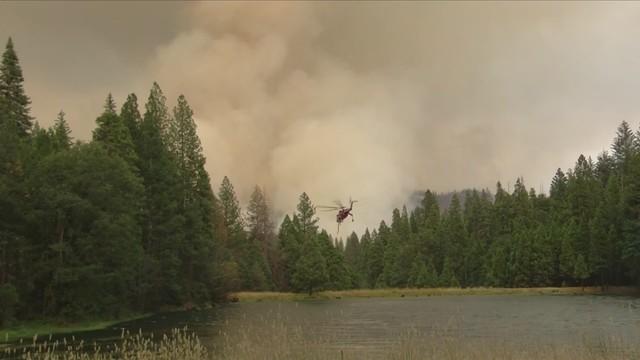 LOS ANGELES -- The heart of Yosemite National Park, where throngs of tourists are awe-struck by cascading waterfalls and towering granite features like El Capitan and Half Dome, will be closed as firefighters try to corral a huge wildfire to the west. The blaze has cast a smoky pall and threatened the park's forest, officials said Tuesday.

Yosemite Valley will be closed for at least four days beginning at noon Wednesday, along with a winding, mountainous, 20-mile (32-kilometer) stretch of State Route 41, park spokesman Scott Gediman said.

CBS affiliate KGPE-TV also says that parts of the Wawona area of the park will close.

At least a thousand campground and hotel bookings will be canceled -- to say nothing of the impact on day visitors, park workers and small businesses along the highway, Gediman said.

"We're asking people here tonight to leave tomorrow morning," he said. "And anyone that's incoming tomorrow will get an email or phone call stating that their reservation is canceled."

"Get yourself out of here if you can," Park Superintendent Michael Reynolds Reynolds told a crowd of about 60 people at the Yosemite Valley Auditorium, according to the Fresno Bee.

Yosemite wasn't under imminent danger from the Ferguson fire, officials were quick to point out. Authorities decided on the closure to allow crews to perform protective measures like burning away brush along roadways without having to deal with traffic in the park that welcomes 4 million visitors annually.

Yosemite Valley is the centerpiece of the visitor experience, offering views of landmarks such as Half Dome, Sentinel Dome, Bridal Veil Fall, El Capitan and Yosemite Falls. The glacial valley's grand vista of waterfalls and shear granite faces has been obscured by a choking haze of smoke from a nearby fire.

Visitors are advised to "limit activity during the periods of poor air quality," the park said in a statement. "Some facilities and services are closed or diminished."

Over nearly two weeks, flames have churned through more than 57 square miles (147.6 square kilometers) of timber in steep terrain of the Sierra Nevada just west of the park. The fire was 25 percent contained Tuesday morning.

Mandatory evacuations are in place in several communities, while others have been told to get ready to leave if necessary.

More than 3,300 firefighters are working the fire, aided by 16 helicopters. One firefighter was killed July 14, and six others have been injured.

Gediman suggested valley visitors divert to Tuolumne Meadows, on Yosemite's northern edge, or to Sequoia and Kings Canyon National Parks to the south.

"There are wonderful places to visit in the region, so we're asking people to consider alternative plans," he said.

In the state's far north, a nearly 4-square-mile (10.3-square-kilometer) wildfire has forced the evacuation of French Gulch, a small Shasta County community that dates to the Gold Rush.