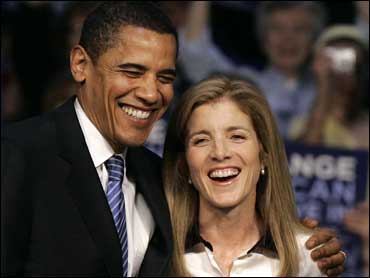 Caroline Kennedy lives a very private life with a very public profile. It's the perfect skill set for her newest assignment.

As part of Barack Obama's vice presidential search team, Kennedy must function with the utmost secrecy in what is sure to be one of the most closely watched endeavors of this year's presidential campaign.

The daughter of President Kennedy has sought and treasured privacy since her father's assassination in 1963.

"She has, I think, a natural kind of reserve about her," said Paul Kirk, a former Democratic Party chairman who now serves as chairman of the John F. Kennedy Library Foundation. "I don't mean aloof, but she is very modest, maybe even shy. She's not one who makes a big scene about herself."

Joel Klein, chancellor of New York's public school system, for which Kennedy has worked raising money from private donors, describes her as "the real deal."

"She is a very loyal, devoted, committed friend with absolutely no pretense," he said.

Klein, whose wife, Nicole Seligman, went to Harvard's Radcliffe College with Kennedy, said the president's daughter has a small circle of friends in New York and they are the few who get to see a wry sense of humor that has rubbed off on JFK's grandson and namesake, 15-year-old Jack.

Recalling a visit with the family on Martha's Vineyard, Klein said John Bouvier Kennedy Schlossberg displayed his mother's wit when the boy asked the chancellor if he were in charge of school snow days and then asked, "Can you do one on my birthday?"

The sole remaining member of a White House family that continues to captivate the world, Caroline Kennedy Schlossberg does not like talking about herself, nor does she appreciate those who do. But recently she has begun to shed some of her trademark shyness.

Kennedy served as cover girl for AARP's magazine on the occasion of her 50th birthday in November. It fell on Nov. 27, just five days after the 44th anniversary of her father's death. Her landmark birthday served as something of a wake-up call for many baby boomers who remembered her as the girl riding her pony, Macaroni, on the South Lawn of the White House.

Little more than two months after her birthday, Kennedy wrote an op-ed column for The New York Times declaring her support for Obama. It touched off three days of coverage that included a raucous rally with Obama and her uncle, Sen. Edward Kennedy, in Washington.

"I have never had a president who inspired me the way people tell me that my father inspired them," Kennedy wrote. "But for the first time, I believe I have found the man who could be that president - not just for me, but for a new generation of Americans."

Kirk said he was surprised that Kennedy has emerged as an advocate for Obama.

"I would never have bet a few years ago that she would be out on the stump for anyone other than her relatives, but she has been a force for Senator Obama already," he said.

Kennedy continues to make appearances for Obama. And now she is serving as a member of his vice presidential search committee. The committee chairman, Jim Johnson, resigned Wednesday. He faced questions about receiving favorable rates on three home mortgages totaling $1.7 million from the chief executive officer of Countrywide Financial Corp., which is under federal investigation as part of the subprime mortgage crisis.

The third member of the committee, former Justice Department official Eric Holder, has been in the spotlight for his role vetting President Clinton's pardon of financier Marc Rich just before leaving office in 2001.

While Republicans have pelted both Johnson and Holder since their appointments, there has been no similar fuss over Kennedy, treated almost like a family member by a public that knows her only through the media.

Kennedy's mother, Jacqueline, moved her and her brother, the late John F. Kennedy Jr., to New York following their father's assassination, allowing them to gain privacy by blending into the city's masses. Following college, Caroline Kennedy interned for her uncle in his Senate office before working at the Metropolitan Museum of Art.

It was there that she met her husband, Edwin Schlossberg, an exhibit designer. They were married in 1986 on Cape Cod, with Edward Kennedy walking his niece down the aisle and journalist and future California first lady Maria Shriver serving as her cousin's maid of honor. They have three children, 15 to 19.

Caroline Kennedy received a law degree from Columbia University and has used her legal training to write two books on civil liberties. She also has edited a volume of poetry and an updated version of her father's Pulitzer Prize-winning book, "Profiles in Courage."

Today she presents annual Profiles in Courage awards and preserves her father's legacy with her work at his presidential library and at Harvard's John F. Kennedy School of Government.