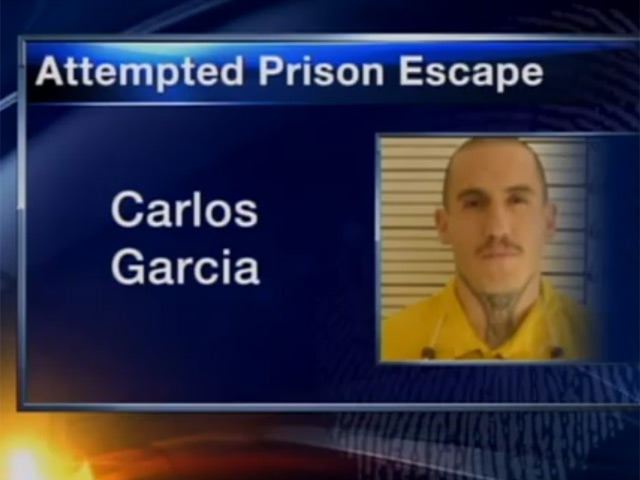 (CBS) HOBBS, N.M. - Carlos Garcia, a convicted killer, attempted to escape from a southeast New Mexico jail last week by breaking a window bar with a razor blade and a Popsicle stick, but changed his mind once he got outside, CBS affiliate KRQE reports.

Police said Garcia, 31,  told them it took about five months to break the bar on his cell window at the Lea County Correctional Facility in Hobbs, where more than 1,200 inmates are housed. He also used plastic, newspaper and more Popsicle sticks to fashion a fake window to make it look like the real window was still there.

"In the 14 years that I've been here, we've never had an incident like that here," said Officer Mike Stone of the Hobbs Police Department.

Police said a guard found Garcia outside early morning on Aug. 20. He initially claimed he didn't know how he got there.

"He said that sometimes he does crazy things, and he kind of acted like he didn't know what he had done," Stone said. "But then he admitted to doing it."

Garcia later admitted that he broke the 6-foot-by-1-foot window in his cell along with the metal bar that went across it, according to court documents.

"The tools that he said he used was a razor blade on the end of a Popsicle stick, and he had worked at it for a while," Stone said.

Police said Garcia then squeezed through the small opening of the window, using bed sheets to propel himself down two stories. But once he was out, Garcia said he had second thoughts and climbed back in.

Garcia was moved to a maximum security penitentiary later that day in Santa Fe for public safety concerns, Department of Corrections officials said. He was convicted of murder in 2005 for killing two young men in 2000. Court records show he was sentenced in 2005 to two consecutive life sentences followed by 55 years, for charges including murder, armed robbery, kidnapping and arson.

Department of Corrections officials said they are now inspecting all cells statewide after Garcia's attempted escape to make sure that inmates couldn't escape the same way.

Garcia claimed he could have made it all the way out if he really wanted to, but police said that's highly unlikely given the additional levels of security he still needed to go through.