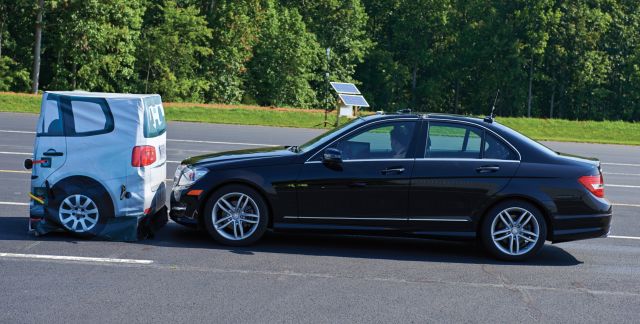 A lawsuit over rearview cameras and new ratings for collision warning and automatic braking systems highlight the trend toward accident prevention gear. Public interest groups last week sued the U.S. Department of Transportation for delaying federal requirements that all new cars have rearview cameras, which let a driver see what is behind a vehicle before backing up. The Insurance Institute for Highway Safety also has expanded its testing programs to rate systems that sense am imminent collision and warn the driver and, in some cases, apply the brakes automatically.

By letting a driver see what is behind his vehicle, this feature can avoid particularly tragic accidents where parents or neighbors back over small children.These "backover" accidents cause an average of 292 deaths and 18,000 injuries a year, according to the National Highway Traffic Safety Administration. About 44 per cent of those killed are children under five. This is especially an issue for large vehicles like SUVs, pickups and minivans.

Under congressional mandate to improve rear visibility, NHTSA and the Department of Transportation have repeatedly postponed the rule that all new cars must have backup cameras after automakers objected to the potential expense. Now consumer advocacy groups, including Consumers Union and Public Citizen, are suing the department to speed up this requirement.

First luxury cars and now mid-priced vehicles have added systems that warn a driver when a front-end crash is imminent and, in some cases, apply the brakes automatically. Kelley Blue Book's Brauer believes this is the most essential safety technology since seat belts and rollover-avoiding stability control. "The auto-brake functions that slow vehicles if they sense a car or pedestrian in the path of travel are the most important new safety features, he said. Car-pedestrian accidents especially cause so much personal injury."

The Insurance Institute tested 74 luxury and moderately priced 2013 and 2014 cars and SUVs that offer a forward collision warning system with or without autonomous braking. These systems often are optional rather than standard equipment. "Front crash protection systems can add a thousand dollars or more to the cost of a new car," said IIHS chief research officer David Zuby. "Our new ratings let consumers know which systems offer the most promise for the extra expense."

The Institute rated vehicles in three categories -- superior, advanced and basic. Each rating depends on the equipment offered and its performance in braking tests at 12 mph and 25 mph to simulate city driving. Here is a closer look at what each rating means and which cars fell into that category:

Whatever the outcome of the litigation over these technologies, backup cameras -- already in 77 percent of 2013 models -- will be required on all new vehicles within a few years. And front crash warning and avoidance systems, in the pattern of all past safety features, will eventually spread even to less expensive cars. Some of the radar and video technology involved are even steps along the road to the driverless car.