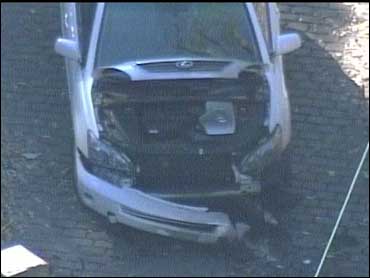 A car bomb explosion critically wounded the head of the Arkansas panel that licenses and disciplines doctors, detonating in his driveway as he was leaving for work, authorities said.

Police said they had no idea why someone would target Dr. Trent P. Pierce, chairman of the Arkansas State Medical Board. The explosive device placed on or near the car shattered the front of his white Lexus hybrid in a blast the police chief said could be heard a mile away.

"We don't know if this was a random target or someone specifically targeted him," said West Memphis Police Chief Bob Paudert. He said it wasn't known if the doctor was in his car or outside it when the device exploded.

Pierce, a family physician, was taken to Regional Medical Center in Memphis, Tenn., where he was listed in critical condition, hospital spokeswoman Sandy Snell said.

The FBI said a second person was injured outside Pierce's home, but Paudert said only one was hurt. The discrepancy could not be resolved immediately.

Pierce had been due in Little Rock later Wednesday in advance of Thursday and Friday's medical board meeting. The board agenda includes at least seven doctors who previously faced discipline.

Board attorney William Trice, of Little Rock, said he knew of no heated disputes involving Pierce and that Pierce often didn't even take part in board votes.

"This is just off the wall," Trice said. "It's just such bizarre circumstances."

Though the motive for the attack was unknown, Gov. Mike Beebe was among those expressing concern for other board members.

"I think law enforcement's reaching out, because you don't know if this was connected to the medical board or it was just something individual," Beebe said. "To be safe, I think everybody's trying alert all the members of the medical board to be able to use extra caution."

Pierce is a family-practice physician who patients include the West Memphis police chief.

"He was loved and respected by everybody in this community," Paudert said. "He was a kind and gentle person."

Pierce's car sat wrecked in his driveway, its hood open and bumper partially torn away.

Police blocked off the tree-lined street about 100 yards from the site. Onlookers could see police officers walking back and forth with dogs, while other investigators wore jackets identifying themselves as members of the Arkansas State Police bomb squad or federal agents with the Bureau of Alcohol, Tobacco, Firearms and Explosives.

ATF agents did not immediately return a call for comment. Paudert said he planned to meet with ATF agents.

Neighbor Julanne Ingram said she heard the explosion about 8 a.m.

"It was a huge explosion," she said. "It rattled the windows in this house."

Pierce, who is in his 50s, was to have attended board subcommittee meetings Wednesday in Little Rock.

He was appointed to the board in January 1997 and reappointed in 2005 by then-Gov. Mike Huckabee. The board oversees the practice of medicine in Arkansas and can discipline doctors for wrongdoing, including revoking their medical licenses.

In August, the chairman of Arkansas' Democratic Party was slain by a man who was later killed by officers after he threatened them. The motive for the shooting of Bill Gwatney was never determined.