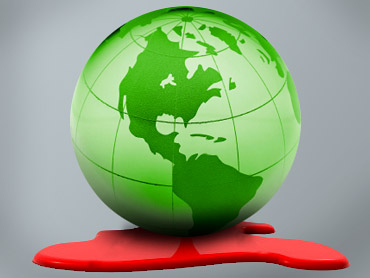 (CBS/iStockphoto)
An inevitability of writing about controversial political topics is that you're bound to see nastygrams from someone who doesn't especially care for what you've written.

After I wrote an article yesterday reporting on the Obama administration's private estimate of the cost of a cap and trade law, the good folks at the liberal Center for American Progress (John Podesta's group) decided they didn't care for it very much.

My article said: "The Obama administration has privately concluded that a cap and trade law would cost American taxpayers up to $200 billion a year, the equivalent of hiking personal income taxes by about 15 percent... the total in new taxes would be between $100 billion to $200 billion a year. At the upper end of the administration's estimate, the cost per American household would be an extra $1,761 a year." Cap and trade is, of course, the idea of pollution credits, meaning that a pollution limit is established and industries can sell the right to emit carbon to each other.

So the Center for American Progress replied by posting a response alleging I was "promot[ing] another false CEI attack on clean energy reform."

CEI stands for the Competitive Enterprise Institute, a free-market think tank in Washington, D.C. that obtained some internal Treasury Department documents through the Freedom of Information Act. The Center for American Progress and CEI are -- approximately -- on the opposite sides of many policy debates, and have been sniping at each other for as long as I can remember. The center has claimed CEI wants to "destroy the climate for centuries" and is staffed by "pathological disinformers," while CEI has says the center wants to grow "young statists" and, besides, is just wrong on general principles.

(An aside: the Center for American Progress incorrectly calls CEI "right-wing," while in truth the group is libertarian and not conservative. CEI, for instance, opposes held-by-many-Republican ideas like video game "violence" regulations and censoring sexually explicit Web sites.)

In response to my article, the Treasury Department's Alan Krueger, assistant secretary for economic policy, said on Wednesday in an e-mail message: "Treasury's analysis is consistent with public analyses by the EIA, EPA, and CBO, and the reporting and blogging on this issue ignores the fact that the revenue raised from emission permits would be returned to consumers under both administration and legislative proposals."

I still haven't received a response.

Sen. Lamar Alexander, a Tennessee Republican, has picked up on this unusual secrecy. His spokesman sent me this statement from his boss on Wednesday: "The current administration claims to be the most transparent in American history, yet it's been hiding a report showing its cap-and-trade energy plan would cost up to $200 billion every year. American families can't afford a new $1,761 yearly energy tax, and our economy surely cannot afford the 1-percent drop in productivity this big-government bill would cause. The best step we can take right now to lower energy costs, boost the economy, and clean our air would be to rely on a technology we created: nuclear power."

Anyway, back to the Center's response. As far as I can tell, it raises these points: a) the cost of President Obama's cap and trade proposal was already well-known; b) the House of Representatives legislation went in a slightly different direction anyway; and c) the tax revenue collected will be dispersed to good causes; and d) the overall benefits outweigh the costs.

Let's take them one by one. First, the Center for American Progress implies that Obama mentioned the $100 billion to $200 billion figure in his State of the Union speech, which is not true (CBS News has posted the transcript). Nor have I ever seen a press release from the White House with that figure, and it's substantially higher than what the president's public budget included; CEI had to pry these documents out of the Treasury Department through the Freedom of Information Act.

As for the third objection, the tax revenue might end up being directed at income tax cuts (or rescuing kittens and feeding orphans, for that matter), or it could end up being wasted on boondoggles. As any D.C. think tank should know, that's no rare occurrence in our nation's capital.

If it is returned to American citizens, it's unlikely to be a wash: some people will end up paying much more in taxes, some will pay a little more, and some will see a net benefit. The reason it's not a wash is that some of that money will be diverted to pay for the overhead of managing this system -- and, in the future, whatever other purposes Congress mandates.

A variant of this is the argument that even if American households will pay $1,761 in new taxes on the average, nobody's really average. We use more or less energy than our neighbors do. Regions that burn coal for electricity will see energy bills go up faster than hydro-powered ones do.

The fourth objection is the most compelling. The Center for American Progress writes: "The potential benefits of clean energy legislation far outweigh the modest costs." That's a reasonable cost vs. benefit calculation, and it includes the claim that even with the extra taxes, cap and trade is so vital to America, it's still worth it.

That's the right approach to take: it would be a very good thing if all federal regulation were subject to a cost vs. benefit analysis. For example, if rising temperatures are significantly harming the planet, and cap and trade would reduce greenhouse gases enough to slow the rise, that would be a real benefit. But the Center for American Progress never actually makes that argument, and as CEI senior fellow Christopher Horner says: "Nobody has ever said this will change the temperature. It won't."

Cap and trade's justification would be stronger if U.S. industries cut their greenhouse gas emissions enough to matter -- rather than the other possibility, which is jobs shifting offshore to countries like China, India and Vietnam that have decided not to levy new greenhouse gas taxes. If that happens, the law's effect would be to make foreign countries more competitive at the expense of American firms.

"The concern about cap-and-trade in today's economic climate," Energy Secretary Steven Chu told the New York Times earlier this year, "is that a lot of money might flow to developing countries in a way that might not be completely politically sellable."

That could lead to carbon tariffs (which Chu and French President Nicolas Sarkozy seem to like), and the possibility of trade wars during an unusually serious recession. Who seriously thinks China, which has already warned that carbon tariffs violate trade agreements, is about to change its manufacturing processes? Or would refrain from retaliation if slapped with carbon tariffs?

Is cap and trade still worthwhile? Yes, if the demonstrable benefits outweigh the costs. So in addition to considering its benefits, let's also look for a full and complete accounting of exactly how much Americans are being asked to pay.

Declan McCullagh is a correspondent for CBSNews.com. He can be reached at declan@cbsnews.com. You can bookmark the Taking Liberties site here, or subscribe to the RSS feed.
View CBS News In
CBS News App Open
Chrome Safari Continue