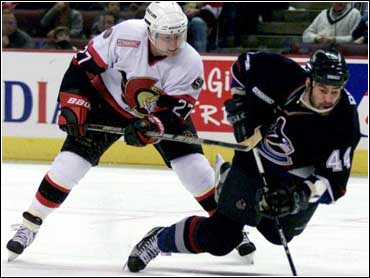 The Vancouver Canucks shut down the Ottawa Senators with their special teams.

"We did a great job on the penalty-killing tonight," Canucks goalie Felix Potvin said. "The Senators are coming on strong, but I don't think we gave them that many chances."

After scoring four or more goals in their previous four games, the Senators started slow, managing just five shots in the first period.

"We were not ready for the beginning; they got the 2-0 lead," center Vaclav Prospal said. "The power play in the first period we gave (the win) to them."

Vancouver came in with the league's 19th-ranked power-play unit, while Ottawa boasted the fifth-best penalty-killing squad, but the Canucks went 2-for-3 with the man-advantage.

Mark Messier's assist on Naslund's first-period goal was the 2,000th point of his professional career, including the NHL playoffs and a brief stint in the defunct World Hockey Association, in which he had one goal and 10 assists.

Darby Hendrickson also scored for the Canucks, who went 3-2 on their road trip. Messier and Murray Baron each had two assists.

"The first period was probably the best period we've had all year," Canucks coach Marc Crawford said. "We dug a hole for ourselves early in the season. All we can o is dig our way out."

Joe Juneau, who left in the third with a hip flexor, scored the lone goal for Ottawa, which had its three-game home winning streak end. The Senators had been unbeaten in five home games.

Juneau didn't return, and his status was not immediately known.

The Canucks improved to 10-8-4-2 against the Eastern Conference, and beat the Senators on the road for the first time in five games.

Naslund converted Messier's cross-ice pass at 9:57 of the first period to give the Canucks a 1-0 lead.

Brashear banged in the rebound of Murray Baron's point shot at 5:46 of the second to make it 2-0. Brashear has recorded the winning goal in consecutive games after scoring the winner Feb. 17 at Buffalo.

Juneau beat Felix Potvin between the pads with 27 seconds left in the second.

Ottawa pressed in the third, outshooting the Canucks 16-7, but couldn't beat Potvin. Hendrickson added an empty-net goal with 48 seconds left to complete the scoring.

Potvin made 34 saves, while Ron Tugnutt stopped 21 shots for the Senators.

"(Potvin) stopped some good shots, but they were happy with the 2-0 lead they got," Prospal said. "They tried to just hold onto the lead and didn't give us much. The last 40 minutes we outplayed them, but they had the lead and we came up short."