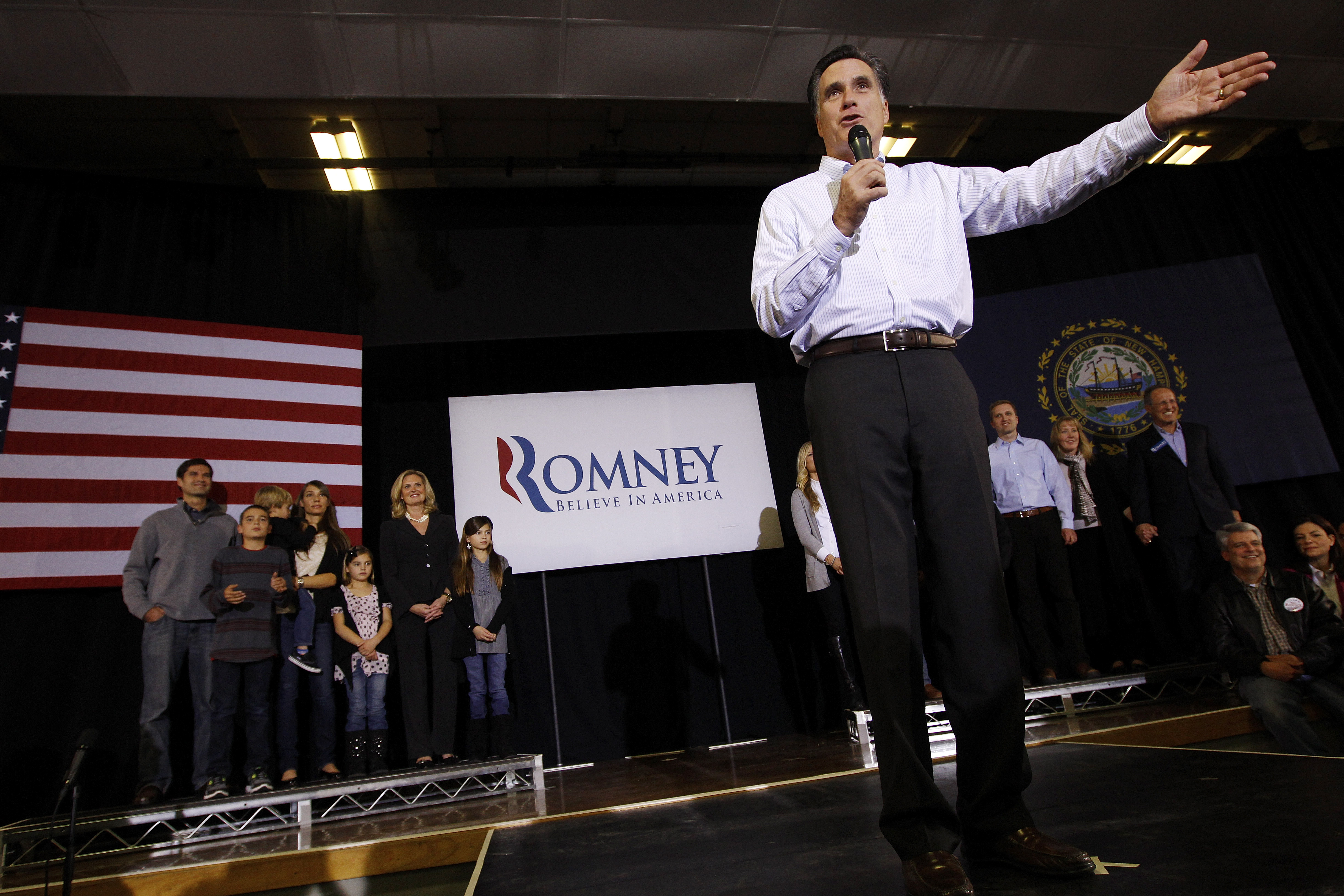 DERRY, N.H. -- Republican presidential candidate Mitt Romney looks as if he's about to trounce his GOP rivals in the New Hampshire primary today, but you wouldn't know it by listening to him on the campaign trail.

Taking the stage in a high school gymasium Saturday morning, Romney started his stump speech with a joke: "Fresh from that landslide in Iowa, maybe can we double that number?" Romney said with a stilted laugh, referencing his eight-vote victory in the January 3 Iowa caucuses.

Romney has for weeks held a double-digit lead over all of his competitors in New Hampshire. If he wins, Romney will have set a milestone: No other non-incumbent Republican has ever won both the Iowa caucuses and the New Hampshire primary since the modern presidential nomination process was established in the 1970's. A University of New Hampshire poll released Monday showed Romney with 41 percent support. Ron Paul trailed at 17 percent, while Rick Santorum and Jon Huntsman tied for third at 11 percent each.

"Let me tell you, don't get too confident with those poll numbers," Romney said Saturday. "I've watched poll numbers come and go. Things change very quickly, it's very fluid. I need to make sure you guys get your friends to go out and you vote as well."

Clearly, Romney knows all too well what political prognosticators are saying: "It's 100 percent an expectations game at this point," said Mike Dennehy, an unaligned New Hampshire Republican strategist.

Romney's dominance isn't too surprising, since he is a familiar name in New Hampshire. He was governor of the neighboring state of Massachusetts from 2003 through 2007, and given that the New Hampshire media market overlaps with Boston's, Granite state residents often heard Romney's name in the local news. Romney also owns a summer home in New Hampshire.

Still, the campaign is taking nothing for granted, said campaign spokesman Ryan Williams. "We're campaigning every day like we're three votes behind," he said.

Yet for all his efforts, Romney seems to have hit a ceiling. He stance in the polls isn't significantly better than the margin of support he won in the 2008 primary, when he came in second place with 32 percent.

"To some extent, it's a race, and Republican primary voters, they want a race," said New Hampshire Sen. Kelly Ayotte, a Romney supporter. "They want to hear the back and forth before they make up their mind."

At campaign events hosted by Romney's rivals, voters seem to confirm Ayotte's statement. Many say they're deciding between Romney and whichever other candidate they've turned out to hear.

Bob and Dee Stiles, for instance, stopped by the Homestead Grocery and Deli in the town of Hollis to hear Rick Santorum speak on Saturday. They said they supported Romney in 2008 and were considering voting for him again, but they first wanted to hear more about Santorum's economic platform. Dee Stiles said they've always liked Santorum's moral convictions, "but we're also considering whether can he win."

According to Dennehy, if Romney wins in New Hampshire by a slim margin - say, 5 percent - the conservative base could coalesce around another candidate. That candidate would likely be Santorum, who nearly tied Romney in the Iowa caucuses and is "the only conservative candidate with the slightest bit of momentum," Dennehy said.

That said, Dennehy added, such an outcome would likely take two other candidates dropping out of the race before the January 21 South Carolina primary, which is unlikely to happen.

Still, Romney's opponents are largely downplaying their own expectations in New Hampshire, arguing they will come back strong in South Carolina, where the electorate is more conservative. Asked on Sunday whether he has to place at least third in New Hampshire to remain a viable candidate, Gingrich said, "No, I think I have to go to South Carolina with a clear communication that I am a Reagan conservative, and that I'm a primary competitor and Gov. Romney's not."

Gingrich: I have to win South Carolina
Has Huntsman's moment arrived just in time?

Williams said the Romney campaign is prepared for a long nomination process. After all, while Iowa and New Hampshire can give a candidate game-changing momentum, they only account for a few dozen delegates out of the at least 1,144 needed to secure the GOP nomination for president.

"Our goal is to reach the level of delegates that's needed for the nomination," Williams said. "We're running a campaign in all 50 states."

Even if Romney wins by a slim margin here, New Hamsphire Republican constultant Jamie Burnett said he's still likely to win in the following states. Candidates like Santorum or Gingrich may close in on Romney's lead, but if they want to truly stop him, Burnett said, "at some point you've just got to beat the guy."