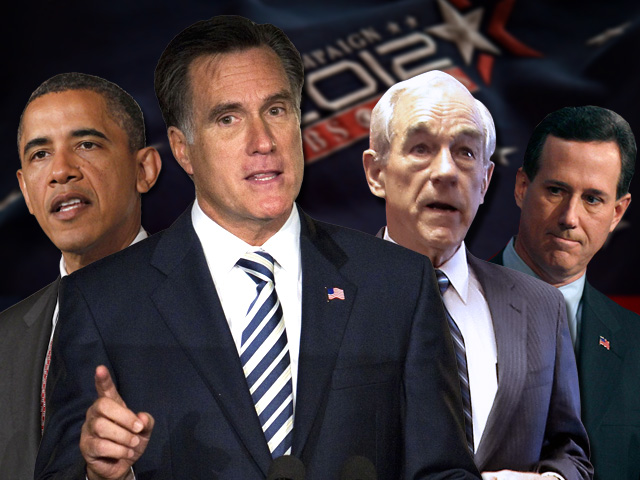 The survey found that Romney is the only GOP candidate to hold a lead over the president in a hypothetical head-to-head matchup, though Texas Rep. Ron Paul trails by just one point.

The survey was taken from Jan. 4-8, in the wake of Romney's narrow victory over Santorum in the Iowa caucuses.

Romney's campaign has argued that Republicans should rally around the former Massachusetts governor in part because he is the most likely to beat Mr. Obama in November. His rivals, including Gingrich, have challenged that claim, with Gingrich pointing to Romney's inability to win over more than 30 percent of Republicans in state and national polls.

Romney, who leads the field with 19 percent support in the new survey, is far more likely than any other Republican to be seen as a general election winner; 49 percent say he has the best chance to beat Mr. Obama, followed by Gingrich at 13 percent.

The president's job approval rating has been below 50 percent for most of the past year and a half. Presidents typically win reelection when their approval rating is above (or very near) 50 percent, and lose when it is below that level.

On the economy - the issue voters overwhelmingly cite as the most important - Mr. Obama's approval rating is just 38 percent, down two points from December. Fifty-five percent disapprove of his handling of the economy.

Mr. Obama fares better on foreign policy: There, 46 percent approve of his performance, while 37 percent disapprove.

Pessimism over the economy, Congress and the direction of the country

The survey finds that Americans are widely pessimistic about their economy, their country's direction and their representatives in Congress. Eighty percent describe the condition of the economy as fairly or very bad, while just 19 percent call it at least somewhat good.

Congress remains deeply unpopular: Just 12 percent approve of the job Congress is doing, while 80 percent disapprove. Democrats are most critical, with 85 percent disapproval, followed by independents at 82 percent and Republicans at 74 percent.

This poll was conducted by telephone from January 4-8, 2012 among 1,413 adults nationwide, including 1,247 interviews were conducted with registered voters. Phone numbers were dialed from samples of both standard land-line and cell phones. The error due to sampling for results based on the entire sample could be plus or minus three percentage points. The margin of error for the sample of registered voters could be plus or minus three points. The error for subgroups may be higher. This poll release conforms to the Standards of Disclosure of the National Council on Public Polls.