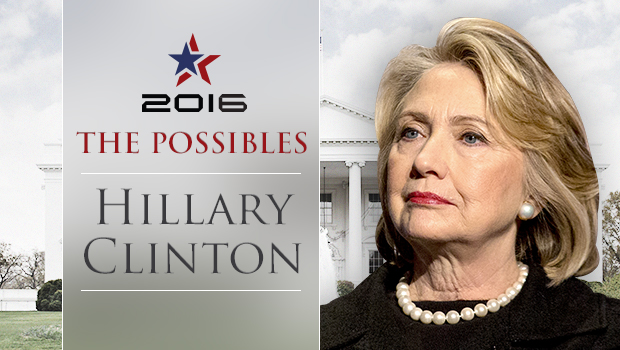 "We have stricken the word 'inevitable' from Hillary's vocabulary," Virginia Gov. Terry McAuliffe, a longtime Clinton ally, declared earlier this month at the annual Gridiron Dinner, an event where Washington insiders get to try their hand at political humor. McAuliffe continued, tongue in cheek, "I've always thought 'inescapable' had a much nicer ring anyway."

There's nothing new about the notion that Hillary Clinton's presidency -- or at least her Democratic nomination -- seems inevitable. This year, however, ahead of the 2016 election, the idea seems harder to shake than it did at this point in the 2008 election cycle.

For months, Clinton has eclipsed all of her potential opponents for the Democratic nomination, both in polls taken nationally and in key states. By comparison, polls from early 2007 showed that Clinton had a solid lead over her rivals but one that only occasionally surpassed 20 percent.

Once she officially enters the race, Clinton will benefit from a campaign infrastructure that's been years in the making. The super PAC Ready for Hillary has been organizing grassroots support for her, while Priorities USA, which once supported President Obama, will help fund pro-Clinton advertising.

Meanwhile, there's no Democrat who appears ready to present a serious challenge to Clinton's candidacy this year, as Mr. Obama did in 2007.

Of course, Clinton's Democratic nomination isn't a sure thing.

Like Clinton, O'Malley appears ready to announce a presidential bid soon. Former Sen. Jim Webb of Virginia has also indicated that he's exploring the idea. Meanwhile, there are ongoing grassroots efforts to draft candidates who could pose more of a challenge to Clinton, including Vice President Joe Biden or Sen. Elizabeth Warren.

Some contend that Clinton could quickly lose her frontrunner status once the aura of inevitability is shattered.

"We do not view Clinton's support as deep, but rather based on the theory that she will win," Chris Krueger, an analyst at Guggenheim Securities, wrote in a market commentary memo earlier this month. "Once she stumbles or another candidate draws blood... we suspect the sharks will circle."

How does Clinton avoid fumbling her current lead? Democrats say she needs to show voters she has a vision for America that justifies her campaign.

"She's sitting in a much stronger position than she was in 2007 at this point," veteran Democratic strategist Bob Shrum said to CBS News. "The real question is what happens going forward. Is this a platform from which she rises, or does she just stand on it? Will she give a vision of the future? I think she will."

Clinton is expected to formally announce her candidacy in April. When she does, she needs to be ready to articulate the policies and ideas that will be the basis of her campaign, Democratic strategist Chris Lehane said to CBS News. "It needs to be real, it needs to be credible... that's really your first shot to get it out there," he said.

What Clinton wants to avoid, he added, is a moment like Ted Kennedy's befuddling 1979 interview with CBS's Roger Mudd, when the Democrat couldn't seem to answer the simple question of why he wanted to be president.

Clinton has in recent months used different venues and forums to talk about economic problems that matter to Democrats and to all Americans, like income inequality. "We have to figure out how to make this new economy work for everyone," she said at a Silicon Valley event last month.

"How do we promote success and upward mobility?" Clinton said on earlier this week at the Center for American Progress. "It's not only about average income, as important as that is. You can look at cities that on average have similar affluence, but people are trapped and not able to move up in one city, and are moving up in another."

Lehane said that he expects Clinton to soon take these lines of thought and "put it all together in a coherent, big idea."

Both Shrum and Lehane say they're confident Clinton can and will put forward the substantive message that voters are looking for -- because they saw her do it in 2008. After losing several primary contests to Mr. Obama, the Clinton campaign seemed to hit its stride in March. Clinton won key victories in Ohio and Texas, where exit polling showed voters thought she had a clear and detailed plan to solve the country's problems. By that point, however, it was too late to take the nomination away from Mr. Obama.

The voters who are "ready for Hillary" in 2016 say that it was indeed the substance of her 2008 campaign that first caught their attention.

Michael Grier, who attended a recent "Ready for Hillary" fundraiser in Washington, D.C., told CBS News that he first saw Clinton on the campaign trail in 2008 in Arkansas.

"She was phenomenal and really inspired me," he said. "I want a president with vision, and she has vision -- it's evident in everything she does... She's here and has a plan and an idea for America."

Progressive activists say they simply want a candidate -- whether it's Clinton, Warren or someone else -- who can champion big, populist ideas. The grassroots group Progressive Change Campaign Committee (PCCC) on Wednesday launched ReadyForBoldness.com, urging Clinton and others to do just that.

"The best way for Democrats to win the 2016 presidential election is by campaigning on bold Elizabeth Warren-style ideas that are popular with voters across in red, purple, and blue states," PCCC cofounder Adam Green said in a statement. "'Ready For Boldness' isn't about any one candidate -- it's about shifting the political environment and ensuring the Democratic Party stands for big, bold, popular ideas. It's a call on all potential Democratic candidates to meet this economic populist moment by thinking big -- with ideas like debt-free college, expanding Social Security benefits, and reforming Wall Street."