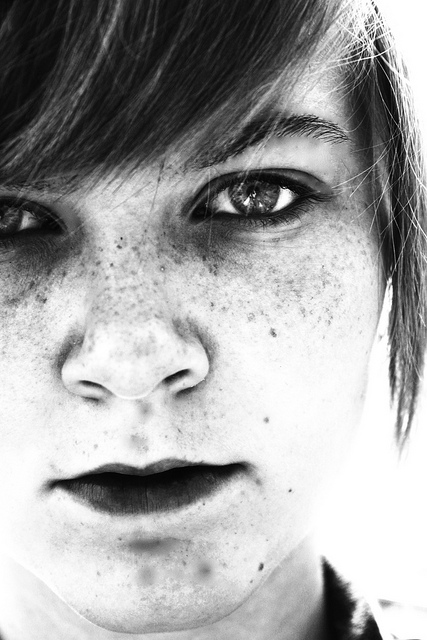 If you're worried that a birthmark or scar on your face, or even a particularly bad case of acne, hurt your chances at your last job interview, there's new evidence that shows you may be right.

The researchers, Mikki Hebl at Rice University and Juan Madera, of the University of Houston, staged mock interviews of people with and without facial scars or birthmarks. There's no sign that the interviewers consciously discriminated against people with scars or birthmarks. That's the good news. The bad news is that even veteran interviewers appeared to be distracted by uncommon facial characteristics. As a result, they remembered less relevant information about the candidate and his or her qualifications, making it less likely that candidate would win a favorable evaluation.

When looking at another person during a conversation, your attention is naturally directed in a triangular pattern around the eyes and mouth... We tracked the amount of attention outside of this region and found that the more the interviewers attended to stigmatized features on the face, the less they remembered about the candidate's interview content, and the less memory they had about the content led to decreases in ratings of the applicant.

In the first experiment, 171 undergraduates conducted mock interviews with job applicants via a computer screen. The researchers used make-up to give the job candidates "scars" for some interviews but not for others. They also tracked questioners' eye movements during the interviews, and calculated the amount of time the interviewer spent looking at the scars. The interviewers were later asked a series of questions to see how well they remembered information about the candidates.

In the second experiment, 38 people with experience in management and hiring -- as opposed to undergraduate students -- did the interviewing. In this case, some of the "job applicants" had facial birthmarks. The researchers were thinking that more experienced interviewers would be less likely to be distracted by unusual facial features. These interviews took place in person, face-to-face. It seemed that the distracting effect of the birthmark was more pronounced in person. These interviewers actually did worse than their younger counterparts.

The bottom line is that how your face looks can significantly influence the success of an interview... There have been many studies showing that specific groups of people are discriminated against in the workplace, but this study takes it a step further, showing why it happens. The allocation of attention away from memory for the interview content explains this.

She and Madera say they hope their research will help raise awareness about this issue, which they characterize as another type of workplace discrimination.

The findings were published online in the Journal of Applied Psychology.

Do you agree with Hebl and Madera that the interviewers discriminated against those with facial flaws? Even if the discrimination was unconscious?

--25 weirdest interview questions
--Why you didn't get the top job
--Does bad credit make you a bad employee?